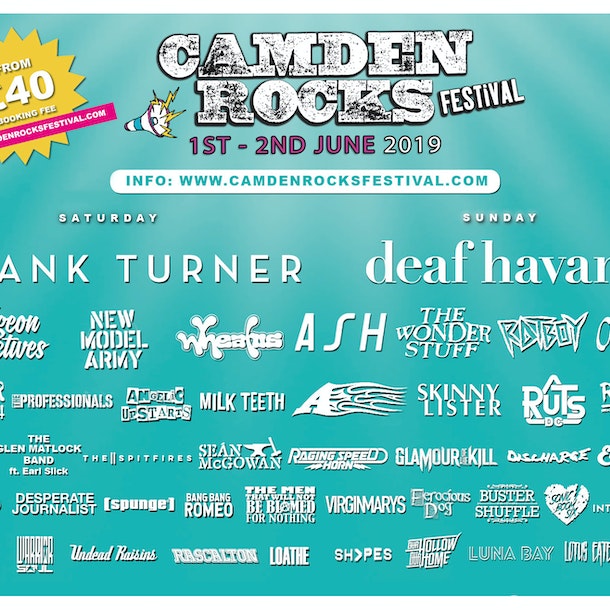 Camden Rocks Festival. An independent urban festival showcasing 400 of the best new and established bands in the UK’s beating heart of music and revelry, Camden Town, on 1st & 2nd June 2019.

Featuring punk-folk singer songwriter Frank Turner and alt-rock quartet Deaf Havana as headliners, Ash, The Wonder Stuff, The Pigeon Detectives (newly announced), Rat Boy, New Model Army, Wheatus, Carl Barat, A, Skinny Lister, Ginger Wildheart, Ruts DC, The Professionals, Angelic Upstarts, The Glen Matlock Band featuring Early Slick, Milk Teeth, Pretty Vicious, Raging Speedhorn, Sean McGowan, Random Hand, Glamour Of The Kill, Discharge, Eliza and The Bear, The Virginmarys, Buster Shuffle, Area 11, Sonic Boom Six, The Last Internationale, Our Hollow Our Home, [SPUNGE} and many many more. Expect the finest acts in live music plus a showcasing of some of the brightest and freshest talent around, across indie, rock, punk and metal. Anything goes in Camden and on the weekend of Camden Rocks, this is amplified to ten.

Norfolk rock outfit Deaf Havana debuted in 2005 with a sound that combined post-hardcore with anthemic pop-punk, akin to contemporaries like We Are the Ocean, the Blackout, and Young Guns. Later, their sound changed somewhat drastically, echoing the hard rock anthems of acts like Daughtry, Shinedown, and Lifehouse.