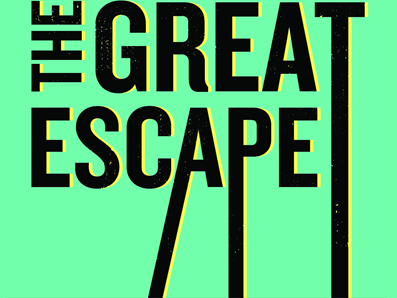 The Great Escape will be returning to Brighton to kick start the 2013 festival season!

The 2012 event brought the best in new music to the Seaside City’s venues for three days and nights and saw 13,000 music fans and 3,000 industry delegates gather for the festival.

An American pop-punk/hardcore four-piece from Kingston, Pennsylvania, influenced by the likes of Saves The Day, Knapsack and Seaweed.

Welsh emo rockers The Blackout are known for their passionate and furious live shows. The youthful six-piece use double vocals and searing guitars to create a frenzied sound.

This Manchester outfit blend falsetto vocals with synths, guitars and discordant pop hooks. Quirky singles like 'Photoshop Handsome' have seen comparisons to XTC, Wild Beasts and Django Django, but the band also have a sound all of their own.

Described by The Times as a 'National Treasure', Billy Bragg's brand of socially and politically aware punk-folk has made a remarkable dent in the British conscience and made his name as one of Britain's most popular and out-spoken singer/songwriters. Drawing on the folk tradition of protest song, and the punk sensibilities of direct action, Billy Bragg has made a name for himself as an accomplished and inspirational musician, and as a charged and pro-active activist. At their best, Billy’s songs present ‘the perfect Venn diagram between the political and the personal’ (the Guardian)

Two drummers, three bass players, a demon ukulele and a larynx crumbling frontman – this chaotic 8 piece are hard to define but nestle somewhere between post-rock and indie pop.

Kimberly Anne is drum kits made from £5 Ikea tables and condenser microphones duct taped to mops. Known for recording/broadcasting live demos and events from her bedroom in South East London, she is truly handmade in every sense of the word. Producing music of a rare and unique quality but yet comfortably familiar, she captures your imagination and invites you inside her brain for a cup of tea and a chat with every track.

Lulu James is a 21 year old singer hailing from the North East of England. Her emotive 21st Century soul sound is making waves across the world. Her debut EP titled 'Rope Mirage' is now available on iTunes itunes itunes.apple.com/gb/album/rope-mirage-ep/id513003694

See Made In Japan tour dates

Sometime in the spring of 2012, the musicians that would go on to form the Chicago and Minneapolis based trio ON AN ON found themselves at a tipping point. The three of them - Nate Eiesland, Alissa Ricci and Ryne Estwing - had played music with one another in various capacities for the better part of a decade. Most recently they had shared the stage and studio as three fifths of the indie-pop outfit Scattered Trees, which has seen its fair share of success. After two of the members of Scattered Trees left the band, they decided to re-group as ON AN ON, heading to Toronto to record their debut album with Dave Newfeld. After smashing everything they previously knew as Scattered Trees to pieces, ON AN ON have pulled together and created a dream-washed textural journey, offering a biting perspective on life, love, and the commonality of loss.

See On An On tour dates

A native of the North Wales countryside, Sweet Baboo aka Stephen Black is a single minded, idiosyncratic singer possessing an ear for sparkling melody and a gift for a deft lyrical turn – from darkly funny to piercingly tender, twinkling boastful to deliciously self-deprecating. Sometimes performing solo with an acoustic guitar, sometimes with a full electric band, his music is influenced by the likes of The Beach Boys, Daniel Johnston and Gorky’s Zygotic Mynci. but with a unique delivery all of his own.

Soak is young Derry singer-songwriter/multi-instrumentalist Bridie Monds-Watson. A raw and emotional singer, she has won widespread praise, and comparisons ranging from Laura Marling to Beach House, for her textured tales of adolescence, family and friendship.

Stefan Abingdon, Dru Wakely and Ashley Horne write songs with an emphasis on parody. A trio of comedy upstarts with musical know-how, The Midnight Beast detonated their very own viral bomb in December 2009 – ‘Tik Tok’. A hilarious parody of the Ke$ha song, it wracked up over 25,000 YouTube hits by the end of the first day and subsequently turned the group into bona fide Internet sensations.