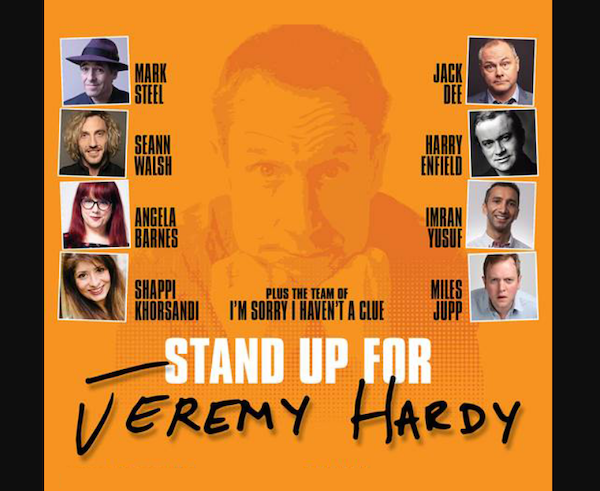 Stand Up For Jeremy Hardy

This show has been rescheduled to 26th January 2022.

Actor and comedian Harry Enfield has seen the nation repeat his unforgettable catchphrases for his comedy characters, from Loadsamoney and Stavros to Smashie & Nicey and Mr You-Don't-Wanna-Do-It-Like-That. In recent times Enfield has enjoyed success as the role of Martin, the father of Alfie (played by Jack Whitehall) in BBC Three's Bad Education, along with teaming up with his old chum Paul Whitehouse for the BBC sketch show simply entitled Harry & Paul.

“Someone you could listen to forever on almost any subject" - British Comedy Guide. Miles uses his toff persona to great comedic effect, combining superbly patronising remarks with ungainly attempts to laddish. Perrier award nominated Miles discusses, rants about himself, you, domestic imprisonment, fatherhood, having to have opinions, hot drinks, the bloody government, bad balance, housing, ill health, the ageing process, navigation, other people's pants and, inevitably, a number of other things. Miles started performing stand up in Scotland in 2000 and the following year won both So You Think You’re Funny and The Leicester Mercury Comedian of the Year. Since then Miles has performed all over the world with his exasperated style of humour, getting a laugh from all of those everyday things that you get a little irked about. His many TV credits include Have I Got News For You, Mock The Week, Michael McIntyre’s Comedy Roadshow and BBC2 hit sitcom Rev, whilst on Radio 4 he's known as panel show host of It's Not What You Know along with appearances on Just a Minute, I’m Sorry I Haven’t A Clue and sitcom In And Out Of The Kitchen, which was nominated for a Writers' Guild Award and will transfer to BBC television in 2014. 'A master of metaphor, a seignior of similes' (Independent) 'His suitcase gags are cute, but this show goes from strength to strength as Jupp finds subjects worthy of his moral outrage' (The Guardian).

Comedian who was a 2008 Hackney Empire finalist renowned for his super-high energy performance. Imran has a unique voice stamping his mark for positive, uplifting comedy at every turn. Born in Mombasa, Kenya and raised in the UK with a brief stint at school in the USA, Imran has also travelled much of the world including Israel/Palestine, Jordan and Saudi Arabia during the Lebanon Crisis in 2006. His work has been inspired by this rich multicultural background, giving him a youthful, energetic and highly original voice that embodies the multi-cultural wealth that exists in modern Britain. He seamlessly switches between styles with graceful fluidity, repeatedly delivering heavy-weight punch lines with enormous panache. His seemingly light-hearted satire is mixed with hard-hitting topical commentary on contemporary issues that culminate into a tour de force of comedy offering an all-embracing sentiment in his trademark styling 'Imran Yusuf's show heralds the birth of a new comedy star. Intelligent, thought-provoking and laugh out loud funny, it's a glorious debut' (Time Out).