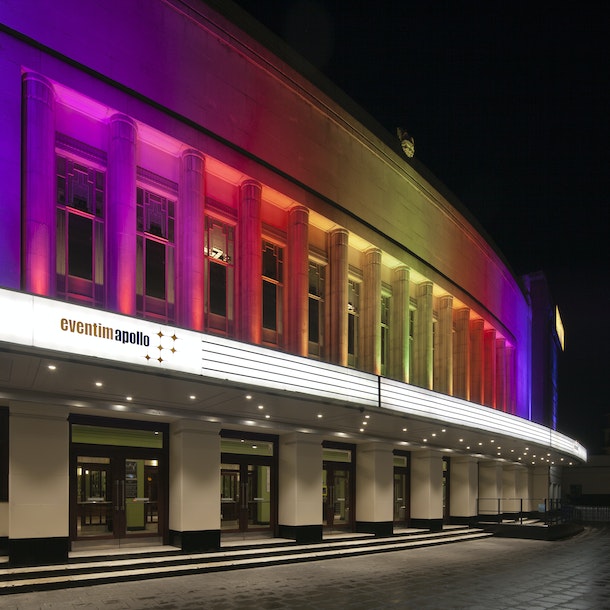 Designed by Robert Cromie in Art Deco style,The Eventim Apollo opened in 1932 as the Gaumont Palace Cinema, being renamed the Hammersmith Odeon in 1962. It became a Grade II listed building in 1990.The fully restored Compton organ, used in its cinema days in the 1930s, is still found at the Eventim Apollo which has also become a favourite place formassive live Comedy shows.

Highlights from the Eventim Apollo's glittering history include 38 Beatles gigs from 1964-1965, David Bowie's last gig as Ziggy Stardust in 1973 and several concerts by Queen in the late 1970's.The venue has also starred in various music DVDs from the likes of Robbie Williams, Kylie Minogue and Kings Of Leon.

Aside from music the Eventim Apollo hosts a top-notch line-up of comedy, dance and kids shows from the biggest and best names in the business, from 'Riverdance' to Russell Brand to SpongeBob Square Pants. The Apollo is also the eponymous venue in the BBC stand-up comedy series Live at the Apollo.

With a mixed standing seated capacity of over 3500 and 5000 for all standing the Eventim Apollo remains one of London’s legendary venues.