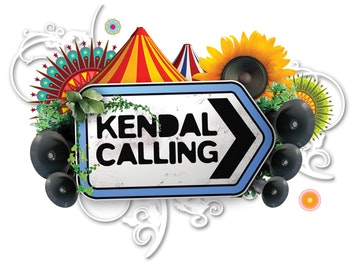 Situated in one of the most beautiful locations in the UK, Kendal Calling has established a reputation as one of the most forward thinking festivals in the country, combing fantastic music, great food, award winning ales and good times in the outstanding surroundings of the Lake District.

This year's headliners have been confirmed as Basement Jaxx, The Charlatans and Primal Scream.

An intelligent singer / songwriter with a sublime voice, funky guitar style and a clever turn of phrase. His musical palette of folk, soul, blues, gospel and jazz is an evolving journey, a constant search for artistic expression captured in the moment, operating well away from industry standards. Surely you’ll hear echoes of Otis Redding, Richie Havens, Tom Waits and Van Morrison in Foy’s music, legends he’s already being compared to and definite influences. An ever so modest Foy will laugh at these comparisons, but then again that’s what makes him so special.

A 3 piece from Manchester UK who regale the world with their twisted torch songs and heart-wrenching serenades. In a nutshell, it's indie art-pop in the Velvet Underground vein.

See I Am Kloot tour dates

Fans of drum and bass and even bass music in general can be assured that Loadstar have everything it takes to be one of the most exciting acts in dance music today.

Having raised herself on music with her family home’s piano and a guitar she bought from a shop on the way to school, Lucy Rose began writing songs of youth and nostalgic fragility, which developed with an increasing awareness of the world. Her music has a sombre yet hopeful tone, which has been successful in the career she has developed from a young age. Rose’s career began in London, where instead of attending her planned place at University, she began collaborating with other musicians such as Jack Steadman, the frontman of Bombay Bicycle Club.

Steven Gene Wold is Seasick Steve, the much celebrated American blues guitarist and singer who continues to serve up a hot mix of boogie, blues, rock, americana and folk music. While his music does not fit the mould of the average chart artist, he has notched up five UK top 10 albums including 2009's 'Man From Another Time' and 2015's 'Sonic Soul Surfer' both reaching the no.4 position.

Bo's songs speak to people on an intimate and personal level. Her soft, husky voice conveying the story of a once complicated and broken soul. Her musical influences are contradictory – from Sigur Ros and Massive attack to David Guetta and Muse – she hopes to combine her love for '90s trip hop and the soaring orchestral electronics of Sigur Ros – with "radio friendly hooks".