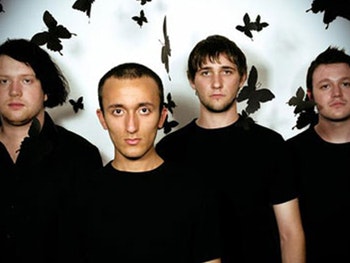 Live At Leeds is a metropolitan music festival held annually across a variety of venues in Leeds on the first bank holiday weekend of May with an ethos that has always been to celebrate the best in upcoming local bands alongside more established national acts.

The main event, on Saturday 4th May, hosts over 100 bands playing across a range of venues around Leeds; all of which are accessible via the purchase of a Live at Leeds festival wristband.

Maybeshewill are an instrumental band based in Leicestershire, UK. Sticking to steadfastly DIY ethics, the band have self recorded all their material to date and aspire to be as self sufficient as possible.

The Leeds-based Pigeon Detectives play an exciting blend of rock'n'roll born out of a love for classic rock music and the indie rock of the 1990s. 'Perfect fodder for indie fans who like to jump up and down as if it's 1995, this band's crunching guitar is simple but effective' says Camden Evening News, reflecting quite accurately the Pigeon Detectives' ethos - to play exciting music to packed out venues.

Unknown Mortal Orchestra bring a distinctive vein of slanted and enchanted rock. The three-piece from America and New Zealand are a modern, beat-heavy take on ‘60s Psych.

North London's Wolf Alice take their name from a book by Angela Carter. Originally a solo project for frontwoman Ellie Rowsell, it soon expanded into a full four-piece band with Joff Oddie (guitar, vocals), Theo Ellis (bass) and Joel Amey (drums, vocals). Eloquently described by Clash Magazine as ‘the lovechild of folk and grunge’, Wolf Alice's off-kilter sound has seen folky vocals combine with the alt-rock of 90's bands like Hole and Elastica.