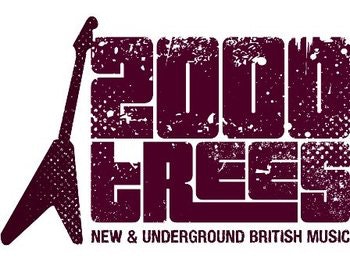 2000trees is all about New and Underground British Music. There are no genre distinctions (although most of the bands do tend to hold guitars), just guaranteed great music in the beautiful Cotswolds. In no particular order, you'll also get an amazingly friendly atmosphere, the highest quality food traders possible and locally handcrafted ales, lagers and ciders.

As tickets are strictly limited to 5,000, 2000trees is an intimate festival and sells out every year!

Formed in 2012, Moose Blood is a four piece alternative / emo band hailing from Canterbury, Kent. Drawing influence from British and American emo bands popular in the mid to late 90s, Moose Blood combine intimate lyrics with a melodic sound to create songs epic in both scope and emotion.

Yuck are an indie rock band that originated in London, England. The band features Max Bloom, who formerly played in the band Cajun Dance Party along with former 'Yuck' member Daniel Blumberg. The band's self-titled debut album was released through Fat Possum on 21 February 2011 in the United Kingdom. Critics have likened the band to bands such as Dinosaur Jr, Pavement, My Bloody Valentine and Sonic Youth.

An alternative / blues rock band from Farmingdale, New York who formed in June 2011, starting out in their parent's basements.

Southern Californian heavy punk group. After a mere twelve live shows they were signed to a major label in 2002 and have since developed a cult following on the American punk scene. Fusing eighties hardcore along the lines of bands such as Black Flag, Fear and Jane's Addiction, with a more modern day rock style, their sound is blistering, unashamed and completely unmistakable. Their original goal was to bring passionate, blood-and-sweat punk rock into the 21st Century.

While She Sleeps are a post-hardcore five-piece from Sheffield. Since the release of their mini-album, ‘The North Stands For Nothing’, in the summer of 2010, While She Sleeps have been on a trailblazing path that has seen them become one of the fastest rising bands on the UK hard rock and metal circuits for some years. From a sold out headline tour, their tent-swelling set at Sonisphere festival, venues on the prestigious Kerrang! tour having queues of people snaked around the block so that fans could get in to see Sleeps open the bill, to critical acclaim across the pages of Kerrang! Metal Hammer and Rock Sound and regular plays on Radio 1, Scuzz and Kerrang! TV, the Sheffield natives have rapidly and justifiably become one of the highest regarded rock bands in Britain.

'Born on the cobbled streets of Bath, Bare Knuckle Parade brings together five musicians who share a love of 'sing until your jaw is broken' drinking songs.' They take their influences from bands including The Pogues, Gogol Bordello, The Levellers, Flogging Molly, Dropkick Murphys, The Dubliners and Bruce Springsteen.

A singer-songwriter whose mix of roots, blues and jazz is in the style of Ry Cooder.