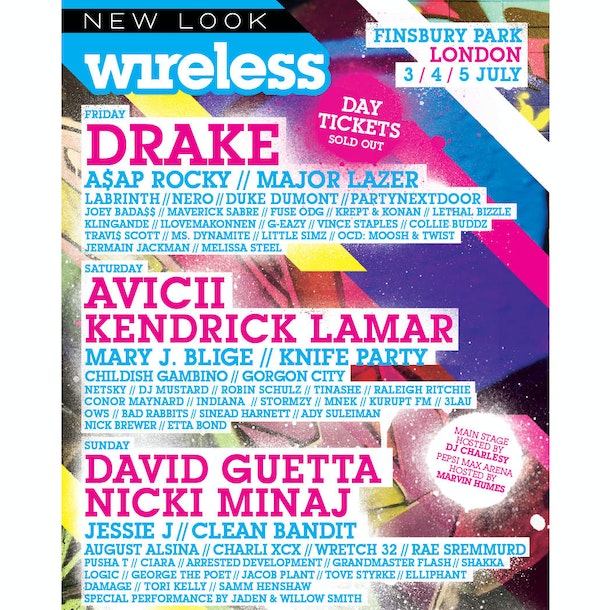 The line-up for the Capital Presents New Look Wireless Festival 2015 has been announced, with Drake, Nicki Minaj, Kendrick Lamar, David Guetta and Avicii confirmed to headline what is one of the year's most anticipated music events.

On Saturday 4th July Avicii and Kendrick Lamar will both headline the event with Gorgon City, Childish Gambino and Stromzy also along for the ride and the Sunday will see Wretch 32, Jessie J and Clean Bandit perform ahead of Nicki Minaj and David Guetta.

Canadian rapper and vocalist Drake sustained a high-level commercial presence shortly after he hit the scene in 2006, whether with his own chart-topping releases or a long string of guest appearances on hits by the likes of Lil Wayne, Rihanna, and A$AP Rocky. Thanks to his introspective rap style, his sensitive R&B crooning, and his gold-touch songwriting, each one of his albums, from 2011's Take Care to 2018's Scorpion, topped charts worldwide, and his singles, like the Grammy-winning Hotline Bling, and many mixtapes did as well. As his star rose, he helped others along, sponsoring the Weeknd's early work, starting the OVO Sound label, and giving features on his records to up-and-coming acts. By the second decade of his career, Drake's constant chart domination, his Grammy wins and nominations, and his meme-worthy cultural presence have made him one one of the world's most popular musicians.

Double grammy award winner David Guetta cemented his status with 2009's multi-platinum One Love; a genre-busting hitmaker whose in-your-face fusion of electro and hip-hop beautifully warps the pop landscape. His track record has been impeccable for nearly two decades and he is now simply, a phenomenon. His name is synonymous with the world's greatest dance music and with parties that bring that music to life. David Guetta has sold over 20 million records worldwide, but despite his pop success, he is a DJ first and he has elevated the art to unprecedented levels.