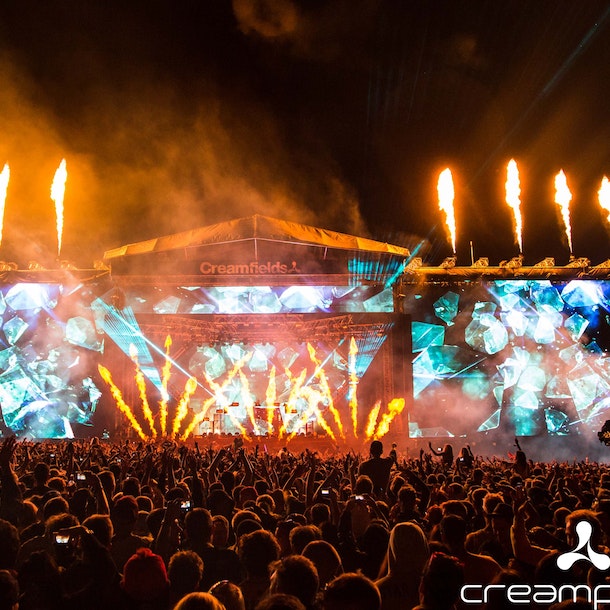 Creamfields is back again over the August Bank Holiday in 2015.

Creamfields is the world’s leading dance music festival. The original dance festival set out to provide the clubbing world with a bespoke large scale outdoor event and has gone on to become the most popular and renowned open air electronic music festival in the world.

Creamfields is famous for many things not least its heritage but it’s consistent delivery of a world class line up and unbeatable atmosphere! The line up mixes together genre breaking pioneers from across the DJ and live music spectrum staged across various stages and arenas.

Talented Dutch trance DJ who has a huge following both in the UK, Ibiza and the US. Growing up amidst the early 90s dance scene in Holland, his producing career started at an early age. Having snubbed a career in law for life on the decks, it seems he made the right decision with a string of awards and his own radio show to his name.

Music maturity came swiftly for the now seasoned-veteran Robbert van de Corput, better known as Hardwell. At the age of 24, the ripened heavyweight has created a legacy that would put most of his counterparts to shame. An award-winning DJ, producer, musician, label manager, lover of all things music, and #6 ranked in the DJ Mag Top 100, Hardwell has not only helped shape the current state of EDM, but has left an everlasting imprint.

The Dutch master DJ with his own brand of pumping, dynamic trance and whose sets take you on an aural journey that must be heard to be believed. Voted world's number one in DJ Magazine's prestigious poll for three consecutive years.

Big beat and dance pioneers Ed Simons and Tom Rowlands, have perfected the art of keeping people on the floor. Their albums are journeys through guitar riffs, massive beats, cool samples and huge breakdowns - taking in everything and anything along the way. With an spectacular live show and a number of critically acclaimed albums to their credit, they are truly established as Superstar DJs.

Music maturity came swiftly for the now seasoned-veteran Robbert van de Corput, better known as Hardwell. At the age of 24, the ripened heavyweight has created a legacy that would put most of his counterparts to shame. An award-winning DJ, producer, musician, label manager, lover of all things music, and #6 ranked in the DJ Mag Top 100, Hardwell has not only helped shape the current state of EDM, but has left an everlasting imprint.

A progressive house duo from Sweden who have skilfully combined their prowess for creating huge pop tracks with their inimitable, stadium-filling sounds and beats.

Swedish DJ/remixer and founding member of Swedish House Mafia (with Axwell and Sebastian Ingrosso). He has released two albums under his own name, 2009's The Yearbook and 2016's Wild Youth.

Gorgon City are North London producers Matt & Kye. Their already distinctive sound is a logical development of the duo’s individual work as RackNRuin and Foamo. Hailing from the impressive Black Butter camp (who brought you Rudimental amongst others), the pair are one of the most exciting and hotly tipped new acts in the ever-flourishing landscape of British club savvy pop.

Over the last 20 years, the term ‘electronic dance music’ and the name ‘Paul van Dyk’ have become all but synonymous. In that time the Berliner has pioneered sub-genres and through his kinetic on-stage performances, entertained untold millions. He’s written and produced certifiable genre anthems, smash albums and helmed one its most iconic labels. Selling out shows in every dance music-centric city on the planet, it’s seen him break more than his share of world records, earn himself legions of fans and win numerous accolades in the process.

#With a Cream residency and music signed to some of the finest labels dance music has to offer, including industry giants Renaissance and Global Underground, Jemmy is making a big impact on the world of electronic music right now. His success is based on a combination of hard work, musical integrity, and powerful creative vision.

International DJ and producer from Sweden, now based in London, Eric Prydz was most famously the man responsible for the European dance smash 'Call On Me', cleverly sampling Steve Winwood's classic 'Valerie'. The song was helped by the accompanying unforgettable fitness workout video! Reaching a respectable 30th position in DJ Magazine's Top 100 DJs poll, Prydz is not only an outstanding tech house DJ, but can also cut the mustard in live performance, fusing keyboards and guitar with turntables to impressive results.