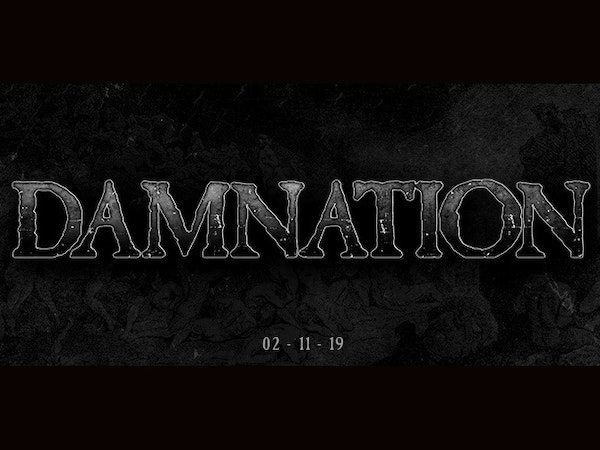 Leeds' best one day metal fest is back in November 2019 for another fabulous edition.

This French band play 'music from another world, a world that is real, but that exists beyond ours and cannot be grasped by our senses. A world where all appearances - trees, glades, streams - emit a pearly light and where a faraway and celestial music fills the air like sweet perfume.'

Birmingham based, Alunah, are a psychedelic / stoner / doom band which unleashes an incredible paganistic sound characterised by thick guitars, a punishing rhythm section, and earthy and hypnotic vocal melodies. Sometimes groovy, oppressive, or downright grimy depending on what the situation calls for, the songs are dark and slow without being downers. Hailed by Terrorizer as 'the future of doom'.

'If, after getting drunk on cheap whiskey you stumbled on to a highway, an earthquake started, and then you were struck by an oncoming eighteen wheeler, you might be able to understand the massive force behind Big Business.....a two-piece rock act from Seattle featuring Jared Warren of Karp and the Whip on bass and vocals and Coady Willis of Murder City Devils on drums'- Capsule.

Birds in Row is an experimental hardcore punk/metal trio who write punitive, exasperated tunes with equisitite, dark textures. Their members maintain a level of anonymity to pin the focus on the music itself rather than those who create it. Birds in Row is committed to a true DIY ethic, placing all their efforts into the creation of a deep fan-to-artist connection.

Black metal from the north of England.

Scottish technical death metal band. A highly potent blend of early Decapitated and recent Between The Buried And Me, the young band bring forth a sense of dazzling chaos.

A dark, electronic artist from Texas, this synthwave solo project channels a fascination with the occult, John Carpenter and 80's slasher flicks.

New York's nebulous avant-garde metal outfit, Imperial Triumphant, redefine sonic darkness with their music. A turbulent, frenetic take on experimental noise and progressive black metal, Imperial Triumphant embody the most austere side of the New York underground. Chaos, menagerie, and the perils of the city clash with its reputation for majesty and extravagance. The band aim to portray the juxtaposition between high society and urban decay.

A four piece black / death metal band from the UK.

A cellist and composer from the UK, Jo Quail uses looping techniques and other pedal effects to create atmospheric classical crossover works.

Lord Dying from Portland, Oregon play a signature brand of progressive sludge. Founded in 2010, by guitarist/vocalist Erik Olson, guitarist Chris Evans, bassist Don Capuano, and drummer/vocalist Jon Reid. At the core of these heavy metal titans are Olson and Evans, who’ve been making music together since fifth grade. They formed Lord Dying before they had a name or a record when another Portland powerhouse Red Fang beckoned them to open some shows for them in 2010. Their live show attracted the attention of Relapse Records, and the band signed a multi-album deal.

When it comes to the definitive history of black metal, Norwegian black metal legends Mayhem are at the forefront. Through the church burnings, murder, imprisonments and myopic teenage nationalism, Mayhem has endured and survived, turning the circus-like atmosphere into a sustained musical career, in the studio and more importantly, on stage, without losing any of their spit and bile along the way.

A perfect mix of several metal styles, with progressive and death metal cited as the most important. Formed in 1990, Opeth have had several radical lineup changes, with Mikael Akerfeldt as the consistent frontman throughout. Opeth are most famed for the heartfelt and poetic nature of their songs, and the influences that come from jazz and blues as well as the overt death metal foundation upon which the band is built.

A rising cacophony of sound that releases itself in a relentless assault on the senses, with guitars that have been trained to hit the jugular with deadly precision.

A young blues / prog rock band from Álftanes, Iceland whose musical influences are very diverse but mainly include the classic hard rock of the 60’s and 70’s. Though the influence may suggest a glorified retro-type band, The Vintage Caravan do it in their own way with a powerful attitude and a modern twist.

A London based metal band who describe their sounds as 'aggressive \ surreal \ abstract \ confronting \ hypnotic \ trance'. Their influences include My Dying Bride, Akercocke and The Berzerker. 'A whirlwind of psychedelic melancholia and psychotic blast'

Wheel formed in Helsinki, Finland in 2015 through a shared love of progressive music. James Lascelles (UK), Saku Mattila, Mikko Maatta and Santeri Saksala (FI) recorded their first EP with Matias Kupiainen at 5by5 Studios, Helsinki. Mastered by Svante Forsback Wheel will release The Path EP on April 21 2017. The band are known for their meticulous attention to detail, a fondness for unusual meters and poly-rhythms and their explosive live shows.