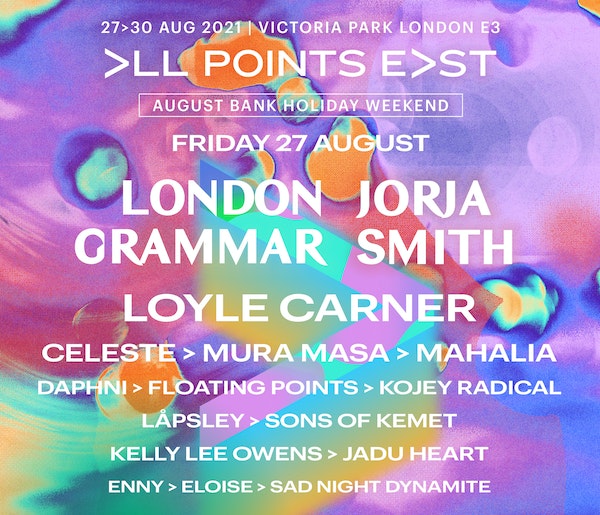 See all dates for All Points East 2021

London Grammar are Hannah Reid, Dot Major and Dan Rothman who formed the band while at university together. Having garnered numerous BRIT nominations and awarded a prestigious Ivor Novello, they remain rooted as one of the most exceptional and successful artists of a generation, whose success and longevity as a band has traced the British pop graph for over a decade.

Young soulful singer/song writer, originally from Walsall, but now residing in London. Her influences range from Mos Def to Lauryn Hill and The Streets, while her soulful and jazzy vocal style has been compared to Amy Winehouse, Rihanna, Lauryn Hill and FKA Twigs. Jorja was working at Starbucks when she posted her first single, Blue Lights, onto SoundCloud in January 2016. It was a stirring listen, backed by her angelic, gripping vocals and a knack for poignant story telling. Within a week, it had racked up 100,000 plays, earning shout outs from Drake, Stormzy and Skrillex. She brewed her last coffee soon afterwards. Then in 2018, she won the Brit Critics' Choice Award.