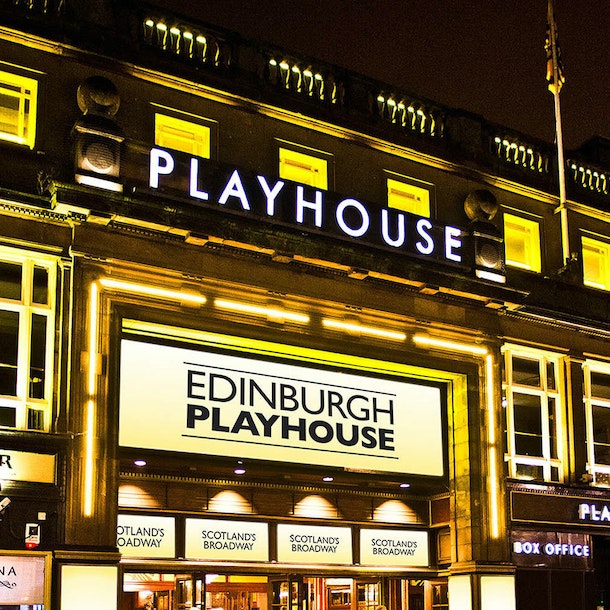 2018 marks the 11th year of partnership between Off The Kerb Productions and Waverley Care, Scotland’s biggest charity providing care and support to those living with HIV and Hepatitis C, and they are delighted to announce that the annual Edinburgh Comedy Gala is back once again in 2018!

Hosted by two of comedy’s hottest commodities, Joel Dommett and Tom Allen, and joined by a supreme line up of comedy talent to be announced, this year is sure to be one of the biggest and best comedy events of the Edinburgh Festival!

Tape Face accesses the inner child in everyone. Through simple, clever and charming humour, he has created one of the most accessible and enjoyable shows the world has ever seen. Drawing on a heritage that includes silent film, mime, magic, puppetry, Motown and the films of Patrick Swayze, he is a pensive, curious soul approaching every object and audience member as a potential friend – or plaything. Since Tape Face’s ‘birth’ his shows have sold out around the world during which time he has become a critically acclaimed silent sensation with Simon Cowell comparing him to a modern Charlie Chaplin. Award-winning Chaplinesque New Zealander who has been compared to Buster Keaton, Harpo Marx and Mr Bean.. 'The Boy With Tape on His Face is utterly spectacular! Endlessly inventive, hysterically funny. Fight for a ticket' (Time Out). 'A truly magical experience' (www.chortle.co.uk) 'Wills makes a big noise by saying nothing at all' (The Evening Standard) 'Everyone should see The Boy with Tape on His Face' (The Daily Telegraph).

Darren Harriott is one of the most exciting up-and-coming comedians on the circuit. Over the last year, he has appeared on Russell Howard’s Stand Up Central, BBC Radio 4’s Best of the Fest, BBC 4 Extra Stands Up, and he also features in a new series for Comedy Central Online. 2017 saw Darren head to the Edinburgh Festival with his debut hour 'Defiant' at the Pleasance Courtyard, which was a big hit with audiences and critics alike. He was nominated for Best Newcomer. Originally from Birmingham, and now living in London, Darren Harriott is a regular at clubs such as Comedy Café, Top Secret, Backyard Comedy Club, The Boat Show, Piccadilly and Covent Garden Comedy Club. A confident performer with a captivating charm, Darren’s comedy deals with everything from subverting stereotypes, to everyday observations, to that juiciest of topics, religion – all with a cutting edge.

Born and bred in Glasgow, Christopher Macarthur-Boyd is a rising star on the stand-up scene. 'Following in the footsteps of Kevin Bridges' (STV) A comedian on the ascent' (Skinny)

Starting his comedy career at the age of 16 in London, Tom Lucy quickly rose through the comedy clubs and became one of the youngest professional stand up comedians in the world. As well as performing all over the UK, Tom has toured internationally in the Middle East, Ireland, Switzerland, Germany, New York and Los Angeles.

Winner of Amused Moose Laugh Off 2015. He made the final of the BBC Radio New Comedy Award in 2016, when Chortle compared him to Jon Richardson, and he has also made the final of the Leicester Mercury Comedian Of The Year, the Leicester Square Theatre Comedian of The Yer and the Comedy Knights Comedian Of The Year. In March 2017 it was announced that George would present Top Gear spin-off Extra Gear giving him his TV debut just a couple of years after he started in stand-up.

Standup Comedian and Writer for 8 Out of 10 Cats and Mock The Week.