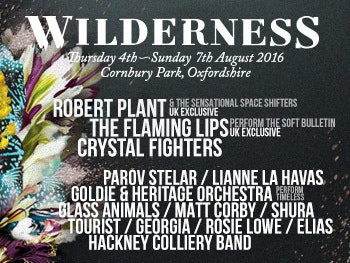 Wilderness is back in 2016 so expect another fantastic weekend of music and entertainment. Robert Plant & The Sensation Space Shifters make an exclusive UK performance. Plus The Flaming Lips will be giving a UK exclusive performance of their classic album 'The Soft Bulletin'.

From the creators of Secret Garden Party, Wilderness carries the same hedonistic vibe but more chilled with a variety of workshops, banquets, spoken-word events and arts activities.

Instead of focusing purely on music - this festival is a lot more about food, entertainment and dancing - it’s a place to chill and explore your inner spirituality.

The location is like a relaxing sanctuary set in the Oxfordshire countryside based around a peaceful lake; it’s a revival of the medieval times.

Wilderness was named the best festival under 15000 in 2012 at the Live UK Music Business Awards.