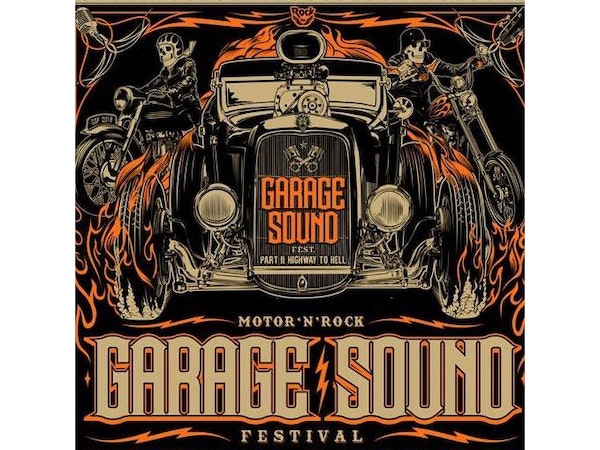 Topping the bill for the second edition are none other than Californian rockers Buckcherry, making their exclusive festival appearance for 2018, and former Deep Purple, Trapeze and Black Sabbath member Glenn Hughes, performing the classics from his time in Deep Purple during the 1970s.

LA rockers Buckcherry have been a part of the American Rock scene since the mid-90s, and have continued to do their thing with style and swagger ever since. Merging punk grit, gutter attitude, honest storytelling, and razor sharp hooks, Buckcherry don't play by the rules.

Glenn Hughes is an inductee into the Rock and Roll Hall of Fame as part of the MK 3 line up of Deep Purple. He spent the formative years of his career as the beloved bassist and vocalist of the group, and performed on the classic albums Burn, Stormbringer and Come Taste The Band. Since 1992, Hughes has toured extensively in Europe, Japan and South America in support of solo albums, but more recently has been involved with award -winning supergroup Black Country Communion with guitarist Joe Bonamassa, keyboardist Derek Sherinian (Dream Theater) and drummer Jason Bonham, son of the late Led Zeppelin legend John Bonham.

Formed in 1996, Toronto trio Danko Jones is made up of Danko Jones on guitar/vocals, John 'JC' Calabrese on bass and Rich Knox on drums. During the first five years, the band garnered a reputation for their incendiary live shows while releasing singles and eps. They toured with The New Bomb Turks, The Make-Up, The Cold Cold Hearts and Blonde Redhead while playing notable shows with Nashville Pussy, Bratmobile, The Hellacopters, The Dirtbombs and Beck. In 2001, all recordings to date were compiled onto “I’m Alive And On Fire” and released on Bad Taste Records out of Lund, Sweden. This kickstarted non-stop European touring that continues to this day. The band has since toured Europe with The Backyward Babies, Turbonegro, Motorhead and Guns N’ Roses.

Swedish glam rock/metal band whose influences range from Motley Crue, Faster Pussycat, LA Guns and Sex Pistols. Having steadily risen to stardom in their home country since their formation in 1997, the Superstars are now infecting the rest of the world with their unique brand of hard rock.

Featuring Nicke Andersson of Entombed and The Hellacopters and Dolf de Borst from The Datsuns.

The Temperance Movement are a five piece blues-drenched, soulful, loud and explosive rock and roll band drawing on their combined influences and experience to turn heads in the music industries on both sides of the Atlantic. Formed between London and Glasgow in the summer of 2011, five like minded musicians decided to take a break from their touring with other acts to write, play and record music influenced by the records which first made them passionate about rock and roll.

Self acclaimed as, ‘The most rock n roll, rock n roll band in the History of History’, Mammoth Mammoth knows that their tongue-in-cheek posturing will always be eclipsed by the explosive force of their live shows. The four piece Australian band share a reckless dedication to having the audience witness a band who’s willing to bleed for them. It’s certainly done no harm in establishing a strong reputation with stoner, doom and hard-rock enthusiasts.

Stone Broken are a four-piece hard rock outfit, hailing from the Midlands, making arena rock with a huge sound and big choruses. You can hear echoes of Feeder and Reef in their sound, combined with hints of Alter Bridge and Nickleback. “Who doesn’t like big, driving riffs and massive choruses?” once asked their A&R man Dante Bonutto. ”At last, a UK band with the sound and the attitude to make it possible for them to compete with rock’s elite.”