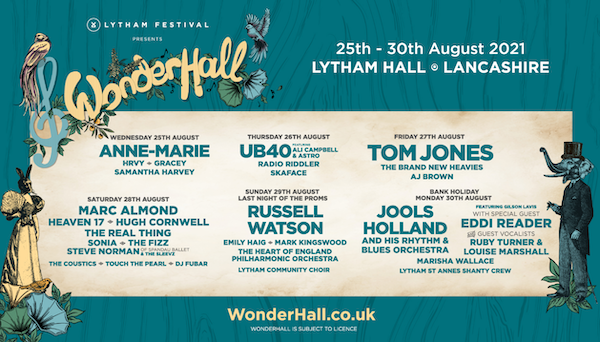 See all dates for WonderHall

Launched by the team behind the hugely popular and successful Lytham Festival, WonderHall will see six nights of live music taking place in the grounds of historic Lytham Hall from 25th - 30th August 2021.

The former Soft Cell frontman is also well established as an internationally acclaimed and successful solo artist. He has sold over 30 million records worldwide and is an icon and influence to a generation of musicians.

Golden Brown, Strange Little Girl, Always The Sun, Peaches, No More Heroes, Nice & Sleazy.... sound familiar? All big hits, all great songs, all written and sung by Hugh Cornwell, the songwriter behind The Stranglers. He is the hitman and he's back with a new album 'Monster' this autumn on Sony Music. Expect an opening set of prime solo songs, including picks from 'Monster', followed by a storming set of those iconic hits, sung and played by the man himself and his band. 'Just strap on your guitar and we'll play some rock & roll.' You can't miss it. The hitman is back.

The Coustics are an electric/acoustic band with influences that range across all the great singer songwriters & bands.

A nine piece covers band based in the North West of England. They are unlike other covers bands in that they find songs that are rarely covered by other groups and then make them their own with fresh, funky sounds and deep grooves.