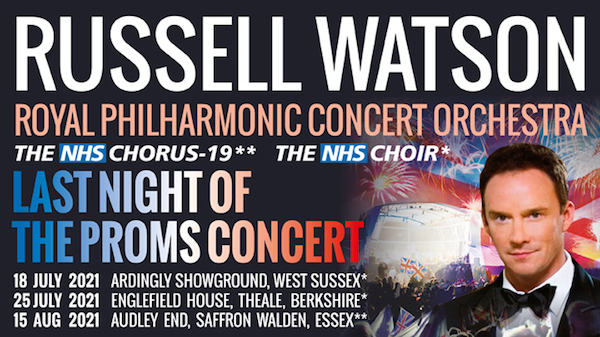 Russell Watson will perform a very special 'Last Night of the Heritage Proms' outdoor show with the Royal Philharmonic Concert Orchestra, supported by the fabulous NHS Choir at the Ardingly Showground in West Sussex, on Sunday 18th July!

Russell will perform an array of classics from much-loved standards such as Jerusalem, Land of Hope and Glory and Swing Low, through to affirming and uplifting showstoppers including You Raise Me Up and Bring Him Home, alongside a very special Phantom Of The Opera medley.

This unique outdoor evening experience will feature a spitfire flypast and a fireworks finale!

£1 from every ticket sold from the event will be donated towards the NHS Charities Together, the collective representing, supporting and championing the work of the NHS’ official charities.