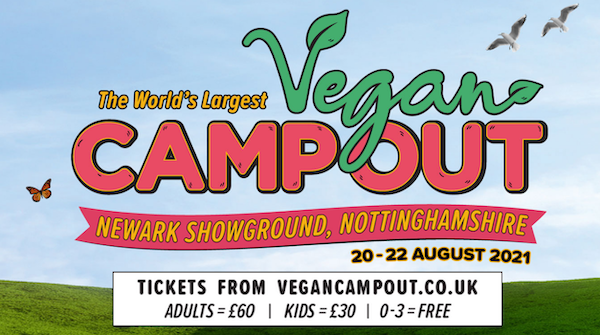 Vegan Camp Out is the world’s largest vegan camping festival as well as being the most international, with campers each year coming from over 40 different countries!

They have a huge line-up with stages for music and talks, space for activism workshops, yoga and fitness, and dozens of delicious food options. Each night finishes with an afterparty with DJs mixing different styles of music for everyone to enjoy.

Since rising to fame in 2003, Russell Brand has established himself as one of one of the world’s most celebrated stand-up comedians. His acclaimed tours include 2006’s Shame, 2007’s Only Joking, 2009’s Scandalous (which marked his US live debut) and 2013’s critically acclaimed and hugely successful Messiah Complex, which was also a best-selling DVD. Aside from stand-up, Russell is also a phenomenally successful broadcaster, actor, author, podcaster, columnist, political commentator as well as a mental health and drug rehabilitation activist.