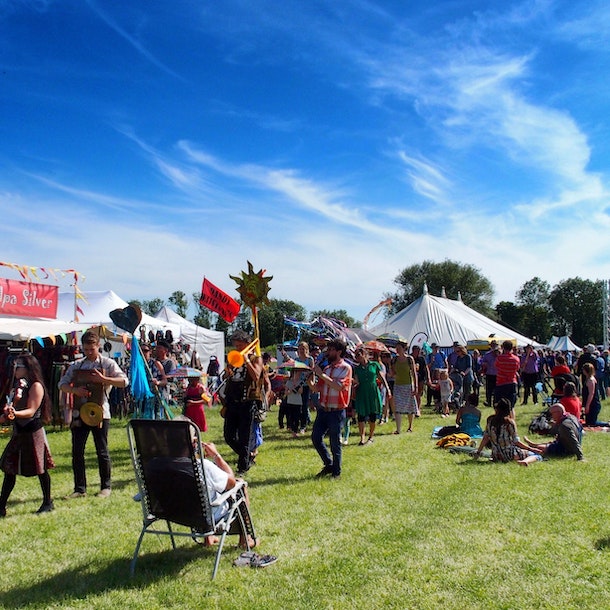 at Kirklington, Nottinghamshire
View Tickets
Discover your top matches amongst the lineup via our Lineup finder

4 days of UK and international roots and acoustic music in rural Nottinghamshire. This is the 14th GTSF and there’s lots new to shout about this year; a new setting on lovely lakeside parkland near the stunning market town of Southwell, on-site camping (by your car), multiple stages, glamping, street theatre, spoken word, artisan food, real ale, great traders, dogs welcome, and all the fun of a 4 day family festival. See the website for all that’s new.

A young master of the Galician pipes, the 'gaita galega'.

John Spiers and Jon Boden are an exciting young pair with tight fiddle and melodeon duos, and powerful singing. Their stature continues to grow as they redefine English Folk, taking you on a journey through raucous tunes, punky, upbeat, rabble-rousing chorus songs, intense ballads and sublime lilting tunes. This and more, delivered with charm, humour, dynamism and spot-on fiddle and melodeon playing. Fresh and fantastic, they are twice winners of the BBC Radio 2 Folk Award for Best Duo and guarantee an energetic live set each and every time they take to the stage.

Phillip plays slide guitar, dobro, harmonica, beatbox harmonica & chatturangui. He is a figurehead for the next generation of English slide guitarists. His virtuoso playing encompasses 360 degrees of influence. He has studied the Delta blues bottleneck for many years and has developed a touch reminiscent of Ry Cooder, while his astounding harmonica technique is inspired by Sonny Terry. Completing and complimenting this feast of music is Hannah, who is a fine fiddle and banjo player, as well as being a gifted vocalist and songwriter. Her interest in the traditional music scene around Devon (where she grew up) has led to a beautiful catalogue of songs that innovatively blend old traditions and new melodies.

Wizz Jones has been playing his own brand of folk-blues since the late 50's and still can be relied to put upon a fine show of old and new tunes mixed in with anecdotes and Wizz's unique sense of humour. Some of the best blues, contemporary and traditional acoustic guitar music around is attributable to this man who is at the roots of the English folk and blues scene. '... the most underrated guitarist ever...' (Burt Jansch).

Already hailed as a supergroup, Irish/Manx quintet Ímar are Glasgow’s hottest new folk property. With a line-up featuring members of Mànran, RURA, Talisk and Barrule, and a heavyweight collective haul of top prizes – including the 2016 BBC Radio Scotland Young Traditional Musician of the Year, a BBC Radio 2 Young Folk Award, nine All-Ireland and eight All-Britain titles – the group’s formation embodies a personal reconnection with its members’ formative years, dating back long before their recent camaraderie around Glasgow’s justly celebrated session scene. Adam Brown (bodhrán), Adam Rhodes (bouzouki), Mohsen Amini (concertina), Ryan Murphy (uilleann pipes) and Tomás Callister (fiddle) share a strong background in Irish music – although only Murphy actually hails from Ireland; Rhodes and Callister are from the Isle of Man, whilst Amini is a Glasgow native, and Brown originally from Suffolk – and it is these foundations which underpin many of Ímar’s distinctive qualities, in both instrumentation and material.

In their five years, Scottish firebrands Talisk have stacked up several major awards for their explosively energetic yet artfully woven sound, including 2018’s Belhaven Bursary for Innovation & 2017’s Folk Band of the Year both at the BBC Alba Scots Trad Music Awards, and a BBC Radio 2 Folk Award. Consisting of Mohsen Amini (the BBC Radio 2 Folk Awards’ Musician of the Year 2018), Hayley Keenan and Graeme Armstrong, the trio seamlessly meld concertina, fiddle and guitar to produce a multi-layered, enthralling signature that has effortlessly captivated audiences from the USA to Australia, and throughout the UK. Appearances at world-leading festivals has amassed them a die-hard following, whilst the world’s folk and world music media have also lauded high credits upon the trio. The release of their 2018 second album, 'Beyond', was met with a five-star ‘Top of the World’ review in Songlines, praising the band as “incredibly infectious and endearing… fresh, invigorating, accomplished and playfully frisky.”

Track Dogs are a Madrid-based acoustic-folk band with members from Ireland, England and the USA. The band takes its name from the maintenance teams working the subway tracks in New York City.

Mystery has largely disappeared from the world; we can put the trolls back under the bridges and remind you not to step into a fairy ring under a full moon! The Last Inklings create music that inspires wonder and intrigue through songwriting, stories and soundscapes. The alt-folk duo is formed of multi-instrumentalists David Hoyland and Leonardo MacKenzie (Ninebarrow Band), former members of respected folk trio Kadia. Their experimental sound focusses on cello, mandolin and violin layered with vocal harmonies. Songs are inspired by folklore and the human element of mythology, drawing on narrative influences ranging from Norse myths to the writings of Neil Gaiman, Joseph Campbell and Carl Jung. Musically they have been inspired by artists including Moulettes, Punch Brothers, Miranda Sykes & Rex Preston, Tobias Ben Jacob, Andrew Bird and Max Richter along with the traditional songs and tunes of the UK. Some of the stories may not be entirely true, but they tell a truth just the same.