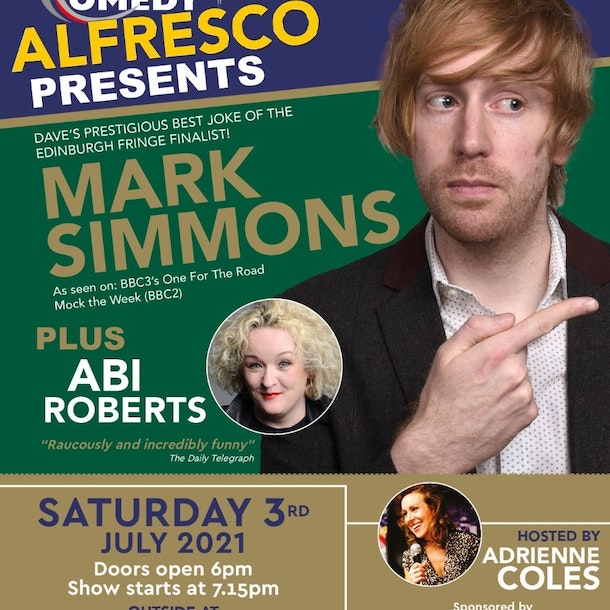 Come and enjoy a top night of live stand-up comedy sponsored by TWK Scaffolding and Lucy Beck – the Lawyer wh0 listens, outside at Bournemouth Electric Club!

Our headline act is the hilarious Mark Simmons! As seen on:
BBC3’s One For The Road
Mock the Week (BBC2)

Mark is an exceptional one-liner comedian. It won him a place in Dave’s prestigious Best Joke of The Fringe at the Edinburgh Festival.

He has supported Seann Walsh, Rob Beckett and Rob Brydon on their national tours, as well as one off shows supporting Michael McIntyre, Sean Lock and Jack Dee and you can see him live at the Electric club!

Opening the show is the amazing Abi Roberts. Abi and her big hair exploded onto the stand-up comedy scene in 2011, after a number of years as a session vocalist and cabaret performer. She has been dubbed by critics:

Abi Roberts and her big hair exploded onto the stand-up comedy scene in 2012. She was a Finalist and Runner-Up in the London Comedy Store's Costa Light Comedy Competition in 2012, a Finalist and Runner-Up In the 2012 Harrogate Theatre's Comedian of the Year and took the Audience Award at the same festival. She is a regular weekend act at comedy clubs such as The Glee Clubs, Bearcat Comedy and Backyard Comedy Club, as well as the major independent clubs, such as Bracknell Comedy Cellar, Banana Cabaret, Gag House Comedy and The Kings Head. Abi gigs all over the UK. She also regularly appears as a Guest Comedian on BBC Radio 4’s Saturday Live, Midweek, Weekend and Outlook, as well as on comedy radio stations Talk Radio, FuBar Radio, Moscow Comedy FM (Russia) and Wildfire Radio (US) and she has just filmed her first sitcom pilot for Sky One playing a Russian woman Irina in Cameron Gordon’s Bucketless, as well as a major roles in Square Cat Films Comedy Shorts, One Under and The Honeymoon. She recently became the first UK comic to perform in Russia, in Russian, completing three nights of shows to packed-out houses at Moscow Comedy Club.