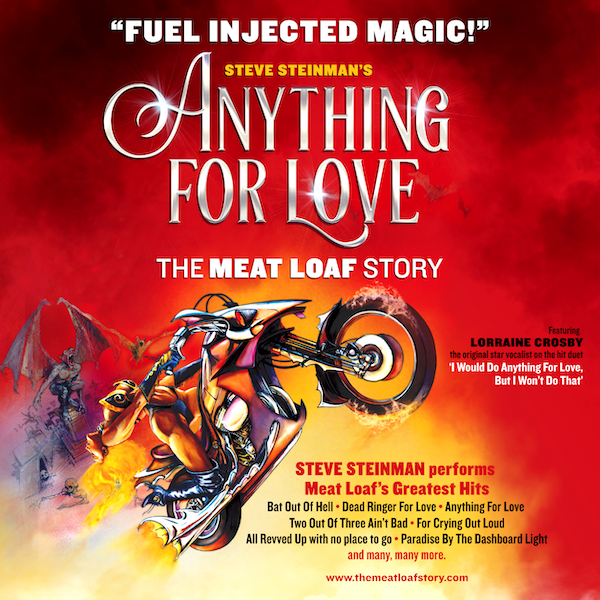 Steve Steinman's Anything For Love - The Meat Loaf Story

at The Forum, Barrow-in-Furness
View Tickets

Steve Steinman's Anything For Love

Starring Steve Steinman and an incredible cast of singers, dancers and musicians, this show will have you rocking in the aisles.

A tongue-in-cheek and laugh out loud storyline combined with an incredible stage set, lighting and sound, and a show like no other.

“They should prescribe this show on the NHS – it really makes you feel so good, you forget about your aches and pains” (Bournemouth Echo)

** This show was rescheduled from March 26th.

Steve Steinman's Anything For Love - The Meat Loaf Story

Anything For Love – The Meat Loaf Story, it’s all about the music! The highly acclaimed Steve Steinman, now in his 28th year, brings you his brand-new production featuring over 25 of Meat Loaf and Jim Steinman’s greatest hits including tracks from Bat Out of Hell, Bat Out Of Hell II and Bat III. With an incredible stage set and ten-piece live band, the show will have you up on your feet dancing and singing out loud. Anything For Love – Bat Out Of Hell – Total Eclipse of The Heart – Dead Ringer For Love – Paradise By The Dashboard Light – Took The Words Right Out Of My Mouth – Holding Out For A Hero – Two Out Of Three Ain’t Bad and many, many more. Steinman has set a new level in tribute theatre, as Meat Loaf is no longer touring this is the closest you will get Reg Enderby – Nottingham Gig Guide Review 2019

Those with good memories might remember him from when he appeared as Meat Loaf on Stars in their Eyes in 1990 but now he is best known as the enigmatic master of rock ceremonies in the smash-hit touring show Vampires Rock and the successful touring shows, The Meat Loaf Story and The Meat Loaf Trilogy.