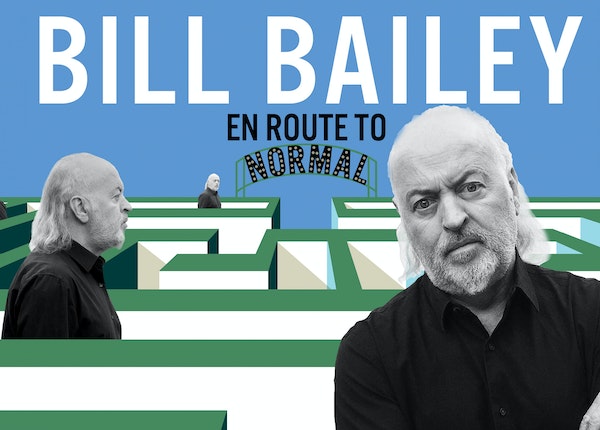 "How did we get here?," asks Bill Bailey. "How do we find our way through this? And exactly who are we again?"

In his new show Bailey ponders this and other questions that this moment in history has thrown up, and tries to see a way through the strange unreality of our new world. Tracing lines through chaotic moments in history, Bill seeks out parallels where human resilience and our ability to endure has got us through times of strife.

He recounts his own experiences of dealing with isolation, including his thoughts on the ‘sounds of lockdown’. This led to a greater appreciation of birdsong and how the natural music of nature in general has inspired many great composers throughout history, and perhaps led to the creation of music itself. Our reliance on technology has inspired Bill himself to create dance remixes of video-calling ringtones.

Through music, songs, and memories, Bill considers our changing priorities, the wonder of dogs, how little things can keep you on track and rhapsodises on his new-found love of skydiving.

Musical deity and comedic visionary? Bath-born founder member of The Rubber Bishops and one of the top stand-up comedians in Britain today. He was winner of the Best Live Stand Up 1999 Award, and spent six years as team captain on BBC TV's Never Mind the Buzzcocks. Bill also starred in the sitcom Black Books and had his own series on BBC2 entitled Is it Bill Bailey?