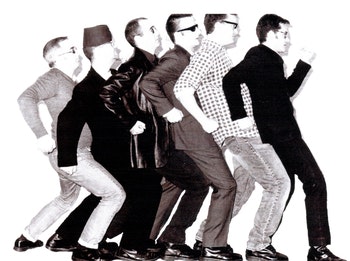 All your favourite bands over one weekend at a budget price!!

Eighties synth-pop legend Howard Jones has been confirmed to play at this year's festival. This announcement comes with the promise of further original acts to be announced at the Turnpost Farm Festival which is now in its 9th year, and marks a turning point in the events line-up and crossover into a more mainstream music event. However, the festival will not change its roots – that of being primarily a Tribute & New Acts Festival.

A tribute to Madness with all the energy and presence of the original act - quite an incredible show. A must-see band!

ABC were one of those groups who come along once a decade to effect a paradigm shift in the way music is heard and made, one of those groups who move the music forward, alerting us to the possibilities of strange combinations, employing radical ideas yet never confusing arrogance with ambition. They kick-started the Eighties with their own brand of pop for the new decade. Fusing dance floor finesse with a post-punk attitude they released their first single, ‘Tears Are Not Enough’, in the autumn of 1981. More hits followed in rapid succession. ‘Poison Arrow’, ‘The Look Of Love’ and ‘All Of My Heart’. On its release in May 1982 their debut album ‘The Lexicon of Love’ crashed straight into the album charts at number one. Although they continued to release more albums over the years, they eventually made an acclaimed sequel to their debut, releasing 'The Lexicon of Love II' in 2017. ABC continue to tour extensively throughout the world, playing sell-out concerts from London‘s Royal Albert Hall to California’s Hollywood Bowl. Whether performing as a band, or performing with an Orchestra, Martin Fry remains the consummate show man.

Jilted Generation is the full on energetic Prodigy experience. Their aim is to bring the sheer power and raw sound of a live event to the excellent and cutting edge sounds of The Prodigy, pleasing the Prodigy fans and the raving rockheads!

The Official Tribute to The Killers playing as far afield as the U.S.A, Europe, Dominican Republic and Mexico filling in for The Killers, The Fillers have played to audiences of up to 30,000 people on stages that have frequented by the real band and continue to expand their horizons as The Killers establish themselves firmly as one of the worlds biggest bands. 'You should check them out' - Brandon Flowers on The Fillers , April 18th 2009.

Ben is a young artist from Birmingham who brings an interesting mix of acoustic, indie and folk in his music. With such a diverse mix of genres and honest lyrics, Ben creates a unique and appealing sound and takes his influences from artists such as Jason Mraz, Bon Iver and Mumford & Sons.