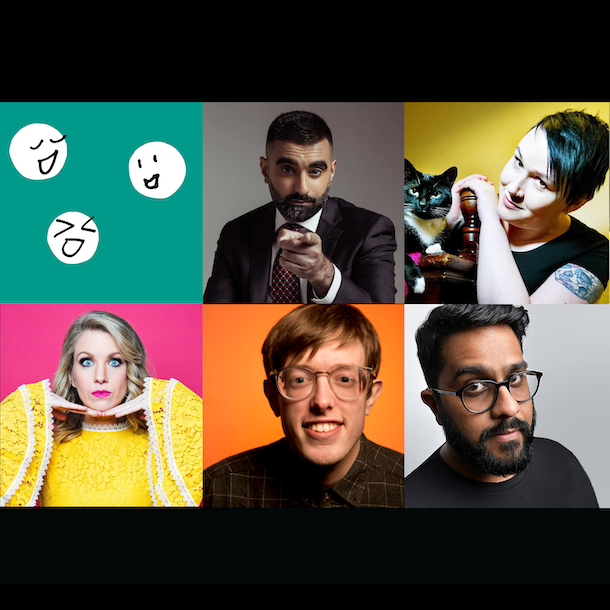 at The Boo, Waterfoot
Passed

Tez will be hand picking some of the brightest and best of the UK comedy scene to join him for this interactive online comedy night.

Virtual Front Row: Pay What You Can, recommended donation £6.50
Via Zoom

General Admission: Pay What You Can, recommended donation £5.00
Private YouTube

We have made our current programme of events “Pay What You Can” to make our events affordable to all our audience. However if you are able to donate the price of a ticket this will help us to continue to keep theatre affordable to all.

Featuring:
Tez Ilyas
A mischievous and engaging comic, he tackles a variety of topics with an intelligent mind and a flair for deconstructing modern society while subverting audience’s expectations. His playful style and cheeky personality, along with a wry wit led him to win the coveted London Comedy Store’s King Gong on his first attempt, as well as reaching the finals of the BBC New Comedy Awards. Tez has appeared on Live at The Apollo (BBC Two), The Last Leg (C4), Mock the Week (BBC Two), Live From the BBC (BBC Two), The Chris Ramsey Show (Comedy Central), Man Like Mobeen (BBC Three), Live from the Comedy Store (Comedy Central). Tez’ Channel 4 comedy Blap Bounty is the most watched show in the strand’s 10 year history. In 2019 he fronted his own Channel 4 satirical sketch series The Tez O’Clock Show to huge critical acclaim.

Rachel Parris
Rachel Parris is a BAFTA Nominated comedian, musician actor and improviser, best know for her viral segments on BBC2’s The Mash Report. She has appeared on Live At The Apollo, Mock The Week, QI, Would I Lie To You, Hypothetical and recently, Comedians Giving Lectures, and Harry Hill’s ClubNite on channel 4, as well as a one-off archive show The Girls Guide to TV, for BBC2. As a musical comedian, she has won critical acclaim for her solo shows which have run at the Edinburgh Fringe, the Soho Theatre London and on national tours, and has been awarded The Chortle Award for Best Variety Act, Best Musical Comedy Show (Whats On London), Best Jokes of the Fringe (Telegraph), nominated for Best Show 2016 (Funny Women) and recommended as a Pick of the Fringe by the Guardian who described it as “Beautifully crafted and performed…tears of laughter”. She lives in South West London with her husband and a chameleon called Roy.

Simon Lomas
Simon Lomas is regarded as one of the most exciting and refreshing new acts on the circuit. Already making big waves, this ungainly and socially awkward geek will doubtless go on to big things as his distinctive style is matched by superb jokes with a highly unique delivery. He’s already a multi-award wining act and is being widely talked about across the comedy industry – catch him now while you can!

Bethany Black
Bethany Black is an actor, stand-up comedian from Preston, Lancashire. She also happens to be a post-operative transsexual lesbian – but don’t dare try to pigeonhole her. Managing to balance being ‘dark-tinged but magical’ (The Guardian) with being warm and chatty, she has built a cult following for her brand of confessional comedy. She has worked alongside some of the greats of the industry and written jokes for acts as diverse as Brendon Burns and Jimmy Cricket. She is a regular at top clubs across the country and has supported acts including Scott Capurro and Rhona Cameron.

'He stood on stage and appeared very shy, awkward, lacking any emotion, and then proceeded to make a string of jokes about his ‘wild’ lifestyle – which went down a storm with the audience' - northwestend.co.uk

Decidedly dark and deliciously different – a one way ticket to a world you never knew existed. Despite being 'unique', she's warm and chatty and has built a cult following for her brand of confessional comedy. 'Outstanding comic, laughs just keep on coming' (Channel 4).