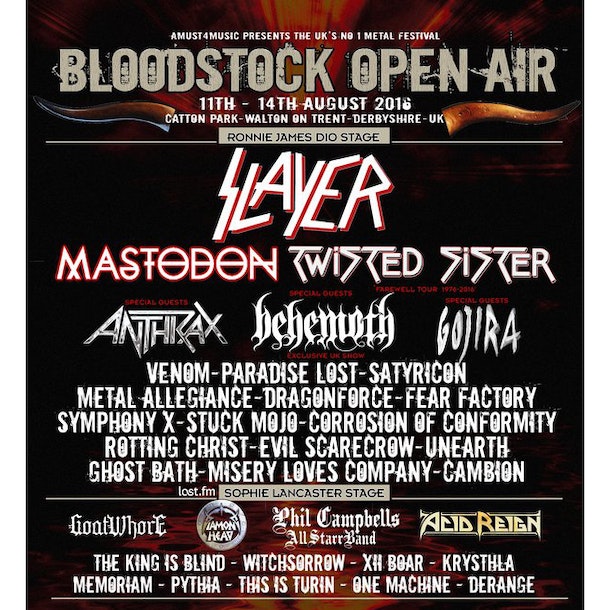 Bloodstock Open Air (B-O-A) is the UK’s biggest independent METAL festival. Held at the picturesque location of Walton on Trent in Derbyshire, B-O-A has won the hearts and minds of fans of heavy rock and metal by consistently showcasing the strongest metal line up on UK soil.

You can expect some 15,000 metal heads descending on Derbyshire again in August 2016 for a weekend of unadulterated full on Heavy Metal!

Bloodstock boasts over 100 international rock and metal acts across four stages, as well as other attractions including a huge international metal market, late night entertainment in the Sophie Lancaster Tent, fairground rides, ‘The Bloodstock Arms’ festival bar serving real ale, full weekend camping and one of the best atmospheres the festival scene has to offer. Add to this a signing tent where you can meet your favourite bands, and for those of you who need those extra creature comforts - an extra special VIP experience in the Serpents Lair camping and hospitality backstage bar, which offers 100+ different real ales, this really is an unmissable date in the headbangers calendar. Metal brethren at your marks!

Goatwhore first reared its menacing head in 1996 from the swamplands of New Orleans, Louisiana, a city rife with urban tales of voodoo curses, witchcraft and hauntings by souls of the damned. Spawned by former Acid Bath/Crowbar guitarist Sammy Duet in 1997, their winding legacy follows a dramatic, at times traumatic, sequence of personnel changes, fatal injuries, paranormal activity, natural disasters, and a collection of other misadventures large and small. They say what doesn't kill you… whether driven by an unwavering commitment to their craft, pure insanity, the divine powers of Satan or perhaps a combination of the three, Goatwhore forever perseveres, inadvertently establishing themselves as one the hardest working, consistently punishing live bands of the 21st century and a true institution of heavy music.

The original Twisted Sister from New York City, formed in 1973. Over 9000 shows under their belt and still going strong, the band reunited in 1997 after a separation in '88, with the 'classic' lineup of Dee Snider, Jay Jay French, Eddie 'Fingers' Ojeda, Mark 'The Animal' Mendoza and AJ Pero, still in makeup, still touring, still a glam face on a heavy metal sound.

American hardcore metal band Mastodon make head-spinning, gut-churning progressive metal of explosive and unbridled force. Hailed as one of the most exciting bands on the metal scene, they are often praised for their incomparable technical ability, fearless stage presence and innovative style.

The Grandaddies of Thrash are still going and are just as brutal as ever. Controversial from the word go, and as extreme as anything that had gone before, Slayer shook the metal world to its foundations in the 80s with a succession of intense, violent and hugely popular albums. Two decades later and Slayer are still one of the biggest draws on the metal circuit.