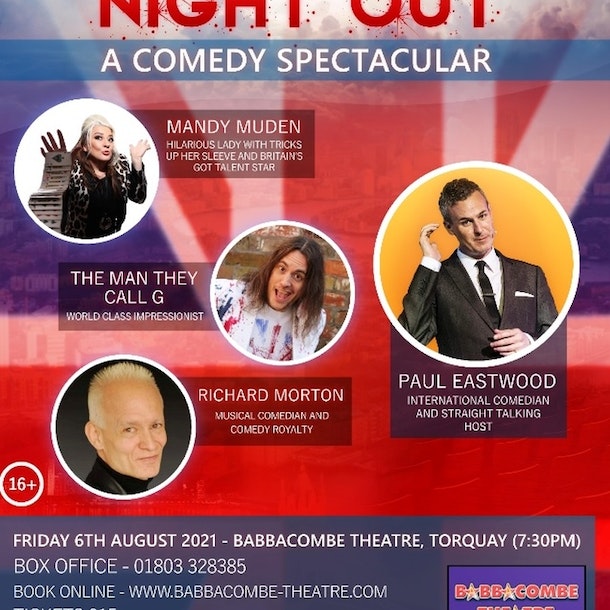 A Slightly Naughty Night Out

Prepare to laugh your socks off and have your funny bone well and truly tickled at this great value, unpredictable evening that promises to be full of pure comedy and non-stop laughs!

Starring a host of the finest and funniest acts on the UK comedy circuit today!

Mandy Muden - She was the first woman to ever combine magic and comedy on the UK comedy circuit and has received The Magic Circle Award for Comedy in Magic. She leaves audiences astounded with both the brilliance of some (certainly not all) of her magic and in hysterics at her off-the-cuff one-liners and observations. Mandy also appeared on Britian's Got Talent in 2018 and reached the semi finals.

The Man They Call G -The UK's most unique and versatile singing impressionist: mimics other singers, celebrities and characters from movies & TV... and is... well, a bit nuts.

Richard Morton - Geordie comedian Richard Morton is a stalwart of the UK comedy circuit with a career spanning over 20 years. His bounding stage presence, catchy songs and material covering real life situations & quick fire gags has made him a true circuit favourite. His career has taken him to support many house hold names including Phil Jupitus, Lee Evans, Jo Brand and many many more.

Paul Eastwood - Funny, fast and with a sparkling personality, comedian Paul Eastwood will have you in stitches with his sharp wit and superb stand-up comedy style.

Get buckled up and be ready for one of the funniest nights of your life!

PLEASE NOTE: When booking online a £2 per ticket transaction fee is applied.

For more information on the show and to book your tickets visit the Babbacombe Theatre website: www.babbacombe-theatre.com/upcoming-shows/a-slightly-naughty-night-out

This smart-suited Geordie is full of surprises and manic energy. His self-depreciating manner belies a razor sharp talent and with witty observations he tackles a plethora of life's situations in his hilarious songs. Possibly Newcastle's finest export since the famous brown ale. Richard has supported Jack Dee, Lee Evans, Jo Brand, Lily Savage and Phill Jupitus on tour as well as having many TV credits to his name. Winner of Time Out Comedian Of The Year. 'Comic genius' (The Daily Express) 'His hilarious songs give musical comedy a good name' (The Guardian).