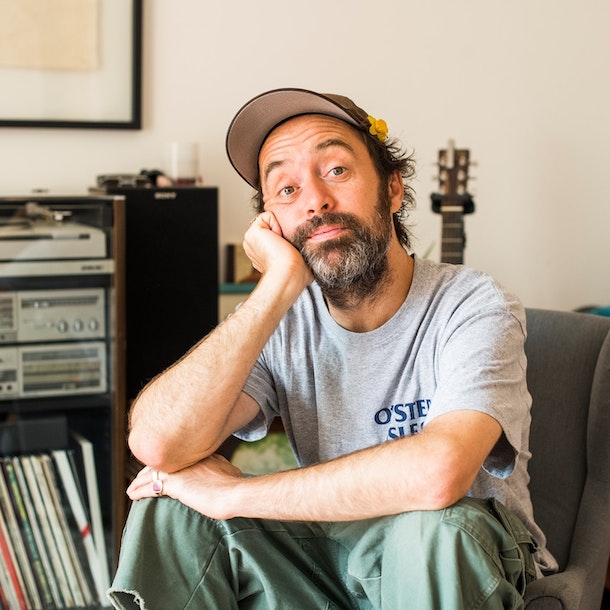 Essex born folk songwriter 'Beans on Toast' is an extremely unique performer. Twisting an age-old genre with a D.I.Y. approach and contemporary concerns has earned him the title of a cult figure who tells it like it is. A festival favourite (he's played Glastonbury every year since 2007) and a prolific writer and performer. He's written and recorded 11 albums and he's played every bar, club, venue, pub, festival, party and honky-tonk you can think of.

He's a hippy, a punk, a poet, a drunk, a die-hard romantic and an eternal optimist. Singing simple songs that tackle big issues. Political protest songs for the modern day, honest and open Love songs. Songs that will make you laugh, but also make you think with no holds barred honesty and quick wit.

He's constantly writing, recording and releasing music and puts out a new album each year on 1st December, which happens to be his birthday. Each album recorded with a different producer and musicians, over the years he's worked with the likes of Ben Lovett (Mumford & Sons), Frank Turner and Kitty and Lewis Durham (Kitty, Daisy & Lewis).

He tours constantly and has gigged and played festivals all over the world. The Beans on Toast live show is an odd and unpredictable experience. A singer, songwriter and storyteller his self-deprecating quality is not something you often see, but it breaks down the barrier between musician and audience, creating a sense of equality.

'Cult legend and all round hero' - Louder than War

“A very rare talent” - Rick Wakeman “He’s Exceptional” - MOJO “A refreshing whiff of anarchy” - Classic Rock "Creative Genius" - Vive le Rock With the release of his latest album Deathrow Disco, Tensheds set's out on tour this winter supporting, and playing with cult folk hero Beans On Toast on a mammoth 27 UK Tour. This will run straight into Tensheds headline tour throughout March. In 2017, following the release of his 3rd album, Tensheds was awarded the Discretional Rock Award at a ceremony held at the House Of Lords. The award was presented by rock piano legend Rick Wakeman. who spoke at great length about the similarities between himself and Tensheds - having both hailed from a classical background. It was a crowning achievement that marked ten years since Matt Millership - aka Tensheds, left the Royal Scottish Academy of Music in search of the Rock n Roll dream. Since then, the world of Tensheds has been anything but ordinary. Album ‘The Dandy Punk Prince’ marked a milestone in his development as an artist. Doing away with all instruments except piano and drums, he set about re-defining the ‘Piano Album’ and in the process created a genre all for himself which he calls ‘21st Century Blues’. Not only had no rock record ever been made with such instrumental limitation, Tensheds instructed his engineer that this must be a hard, gritty, base heavy punkblues record, oh and that it was to be recorded on his near 200 year old grand piano! Having already set the bar high, Tensheds then moved himself, drummer and engineer into Leicester Square Theatre in Soho for seven nights to record the drums – he wanted the largest space possible but unfortunately his 1835 grand piano was too fragile to move. So following their Seven Nights In Soho, Tensheds and engineer Simon Kitts then relocated to his Sussex Square home in Brighton, turning the entire house into a recording studio to finish the record. Tensheds attention to detail and crazy ambitions certainly paid off when the record won critical acclaim across the board from the likes of Classic Rock, MOJO, UNCUT, Maverick, R2, Vive Le Rock, BBC Radio. Praise certainly doesn’t come higher than Liverpool Sound & Vision declaring “A New Spectrum of Music”, well maybe from Penny Black Music “Settle back andinhale his Genius”. However, Tensheds real magic lies in his live performances. His audacious showmanship and Rachmaninoff style piano skills, deftly delivers a brand of gritty, heavy, edgy blues/punk, which incorporate elements of this classical background. Honing his craft in the time-honoured tradition, hoboing the road. Most recently touring the UK supporting Beans On Toast, while over the years Tensheds has had the honour of opening for legends; John Mayall, Mick Taylor, Hazel O’Connor, Paul Young, Roger Chapman, Spear Of Destiny, Blockheads, Paul Kelly, and James Burton. Not to mention his touring commitments with Beans On Toast and Jim Jones And The Righteous Mind as fulltime keyboard player. Is it any wonder he’s been labelled “Jerry Lee Lewis and Tom Waits’ love child”. Get Ready To Rock – “Nick Cave meets Lady Gaga” Viva Le Rock “Genius” Louder Than War - "Unique talent and Creative Genius" Cat On The Wall - "A work of perfectionism, perhaps obsession" Penny Black Music - "Settle in and inhale his Genius" UNCUT - "Great Depth & Wit" Music News - "One of the mostPowerful albums of the year" Rock n Reel - "Most Unique" Liverpool Sound & Vision - "A New Spectrum of Music Blues Matters "A Stunning Album" Gig Guide "Prepare To Be Transfixed" Pure Rawk - "A very unique sounding album" Buzz Mag - "Imagine if Waits had formed the White Stripes"