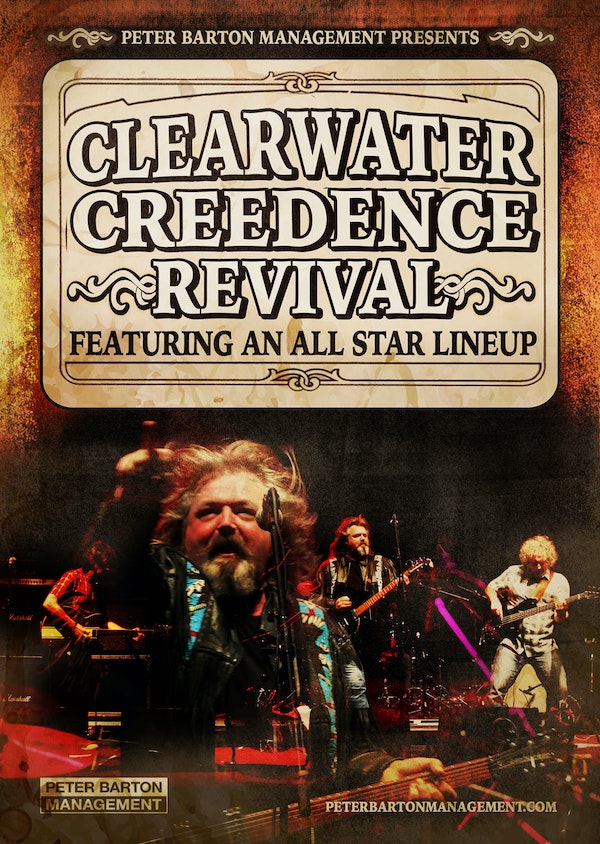 This show was rescheduled from 26th February 2021.

Selling out at venues all over the world, Clearwater Creedence Revival (tribute to Creedence Clearwater Revival) feature road-hardened players who, collectively have performed with – Stax legend Steve Cropper, Big Country, Denny Laine (Wings, Moody Blues), Eric Haydocks Hollies, Animals And Friends, Alan Silson (Smokie), Wayne Fontana’s Mindbenders and more. Together, they are the best ‘tribute’ to CCR & Fogerty you’re ever likely to see! “Clearwater Creedence Revival do themselves “Proud” (‘…Mary’). The vocalist is a big, bearded fella with a lovely, gravelly voice and he guides us through some classic Country stylings and soothes many a hungover head. ‘Bad Moon Rising’, ‘Have You Ever Seen The Rain’ and ‘I Put A Spell On You’, amongst others, make not being able to get to the bar more bearable, and in a world seemingly overrun with Creedence bands, this lot can hold their heads high above the rest.“ (ROCKTOPIA, Giants of Rock review)