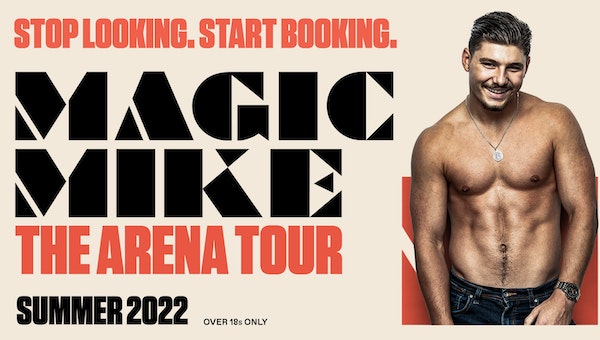 Magic Mike The Arena Tour will open in May 2022. With more dancers, bigger numbers and more spectacle than ever before, this will be the first time a live performance of Magic Mike has ever been staged outside of an intimate, cabaret-style space. The Arena Tour will open in Belfast on 6th May, followed by Glasgow, Aberdeen, Leeds, Sheffield, Newcastle, Nottingham, Birmingham, Manchester and finishing in Liverpool.

Following two hugely successful films starring Channing Tatum and the hit Live show at the Theatre at the Hippodrome Casino in London, the show’s producers and creative team felt it was time to develop a new Magic Mike production to bring to people in other parts of the UK to celebrate the rebirth of live entertainment.

With two hugely successful films starring Channing Tatum and the hit productions of Magic Mike in London, Berlin, Australia and Las Vegas, Magic Mike has turned up the heat across the globe. Celebrate together again as some of the hottest, most talented guys on the planet come together for the once-in-a-lifetime, epic dance party that you deserve. So stop looking... and start booking.