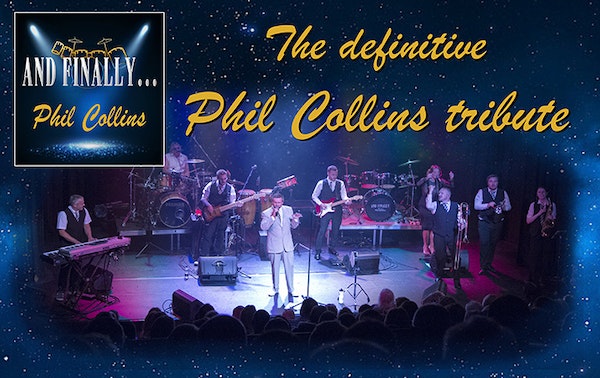 For over 30 years, Phil Collins has written a diverse range of songs that have defined generations.

And Finally…Phil Collins are credited as being the UK’s Top Phil Collins Tribute, fronted by singer Chris O'Connell who brings to the stage the charisma and characteristics of the man who fronted Genesis and has sold 150 million albums in his solo career.

The hugely successful And Finally Phil Collins are touring now. This well-established, superbly professional, and entertaining production perform an action packed two hours of the best-known songs from Grammy award winner, Phil Collins. All the classics are included - In the Air Tonight, Sussudio, Another Day in Paradise, Against All Odds, as well as a selection from his Genesis archive. The line-up includes the usual two drummer extravaganza and the ever popular ‘And Finally… Horns’, who are always a favourite with the audience! And Finally...Phil Collins is the show to see for anyone who grew up with the sounds of music legends Phil Collins and Genesis. Prepare for an evening of reminiscing with outstanding musicians who adore the music they perform.