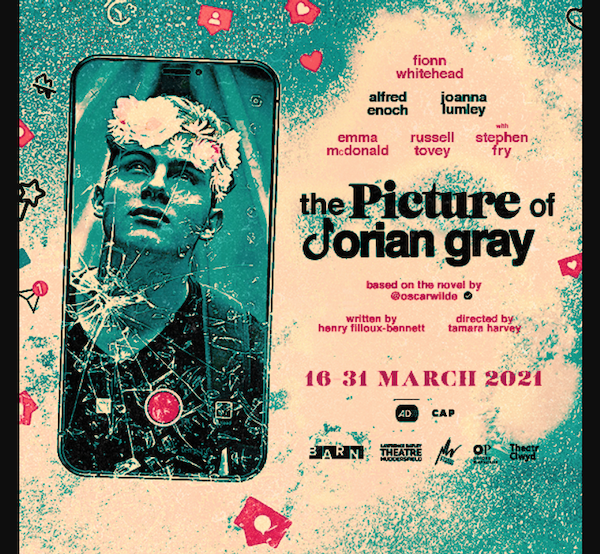 The Picture Of Dorian Grey

In a profile pic-obsessed, filter-fixated world where online and reality blur, influencer Dorian Gray makes a deal. For his social star never to fade. For the perfect self he broadcasts to the world to always remain. But as his mental health starts to decline, as corruption and murderous depravity start to creep into his world, the true and horrific cost of his deal will soon need to be met.

From the team behind the New York Times Critic’s Pick, five star “game-changer” (Telegraph) online production of What a Carve Up! comes a brand-new adaptation that brings Oscar Wilde’s Faustian tale kicking and screaming into a world of Instagram, Facebook and dating apps.

How it will work:
Once you have purchased your ticket you will receive a booking confirmation including your screening link. This link will be active on the date you have booked to view The Picture of Dorian Gray and will expire after 48 hours.

Please check your junk/spam folders for any emails relating to the performance.

Joanna Lumley icon, national treasure, activist, comedy actress and all-round top girl is barely off our TV screens and appears to have been a permanent fixture in our sitting rooms since she burst onto our screens as Purdey in the New Avengers in 1976. Purdey propelled her to instant fame and created one of the "must-have" hairstyles of the 1970s – the Purdey bob. She became a pin-up figure for a generation of British males who grew up watching her as the high-kicking action girl. Alongside iconic hairstyles, Joanna started to develop a nice side line as adventurer and activist; popping up all over the globe she was often seen gasping at the Northern Lights, turning her bra into espadrilles and finding the source of the Nile. Then as Patsy Stone in Absolutely Fabulous she became a degenerate role-model for a generation. Winning two BAFTAs, Joanna emerged as one of the best comedy actors of her generation. For 25 years the adventures of Patsy and Edina have sporadically lurched across our screens culminating in AbFab The Movie in 2016.