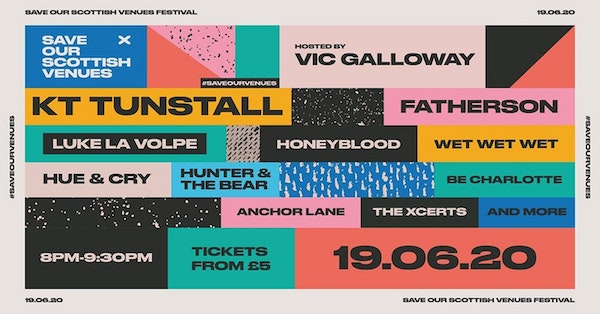 Save Our Scottish Venues

See all dates for Save Our Scottish Venues

Curated by Music Venue Trust through the #SaveOurVenues campaign.

WATCH: Ticket buyers will be directed to a streaming link to watch the performance.

DONATE: 100% of the donations will be divided equally amongst Scottish Venues!! You can donate here >>
www.crowdfunder.co.uk/saveourvenuesscotland

£5 for access to the live event, including hopping between stages. It is £8 for access to all of the sets for an extra 48 hours after the festival ends:

You can also purchase tickets through crowdfunder which will mean that we do not have to pay an admin fee:
www.crowdfunder.co.uk/saveourvenuesscotland

The BRIT awards winner of Best British Female Solo Artist of 2006 needs little introduction these days - the evidence of her success is unavoidable in Britain today. By her own testimony, her rather personal and reflective music is rooted in her adopted childhood; 'I grew up knowing I could have had a million different lives. It makes your life mysterious and your imagination go wild.' She's earned a solid reputation as a live performer and also pioneered the use of live sampling in chart music, which features significantly in her concerts with the use of a pedal she refers to as 'Wee B**tard'.

Fatherson are a four piece alternative / indie band based in Glasgow and formed in Kilmarnock. They have been making waves in the Scottish music scene following a string of supports with bands such as Frightened Rabbit, Panic! at the Disco, Feeder, Twin Atlantic and Idlewild.

Luke La Volpe bring together a mixture of blues and rock and roll to form a unique live sound, which has been generating interest across the industry. The band has enjoyed performing to packed venues across the country, supporting the likes of Alabama 3, Gerry Cinnamon & Tom Clarke (The Enemy).

Originally started as a two-piece in 2012, Glaswegian Honeyblood has a sound that has been described as 'slacker-grunge-garage-rock', but founding member Stina Tweeddale prefers to call it ‘crunch-pop’. Her sound has drawn comparisons to recent favourites Best Coast and Frankie Rose, along with hints of 90s female guitar heroes the Breeders and Throwing Muses. Three albums in, Stina has decided to claim the sole spotlight of the project and said that makes sense, as Honeyblood has always been Stina's voice. Before it was even a band, or a name, Stina was writing the songs that would form the backbone of the band's identity.

80s pop sensations, Glaswegian quartet Wet Wet Wet had a meteoric rise to fame and success from humble beginnings. Renowned for their brilliant soulful ballads, perfectly hand crafted songs and exceptional live performances, the Wet's went on to sell in excess of 15 million records, enjoying three number one hit records; With a Little Help From My Friends, Goodnight Girl and Love Is All Around from the film Four Weddings And A Funeral which spent a staggering 15 weeks at the number one position. In 2018 Graeme, Tommy and Neil welcomed Kevin Simm as the new singer of Wet Wet Wet. Kevin is best known for his time in Liberty X and as winner of the 2016 series of The Voice.

Brothers Pat and Greg Kane from Glasgow whose compositions and performances took the best of American jazz and soul and made it hip and trendy. Supporting everyone from Madonna and U2 to Ray Charles and James Brown, they set the charts alight with a string of hit singles and albums in the late 1980s.

Daytime TV (formerly called Hunter & The Bear), a band described by The Huffington Post as 'the heroes British rock needs right now', released their debut album in 2017 which entered the iTunes Rock Chart at number 5. They then signed with X-ray Touring and undertook two sell-out UK tours, including a headline date at The Garage in London. They had their most exciting year to date in 2018 with impressive slots at major Scottish festivals TRNSMT and Belladrum as well as bagging their first ever festival headline in the Hebrides. You can expect lots from Daytime TV. They expect it from themselves!

Be Charlotte is one of the most innovative artists in Britain. Her songwriting prowess is beyond her years and has taken her on several Transatlantic journeys from her hometown of Dundee, Scotland. Her singing voice is flawless. She also raps and beatboxes and has helped to invent her own unique musical instruments.

BBC Radio Scotland presenter with an amazing pedigree of putting the Scottish music scene on the radio and highlighting a plethora of new and established artists to an increasing audience not just in Scotland but all over the world.