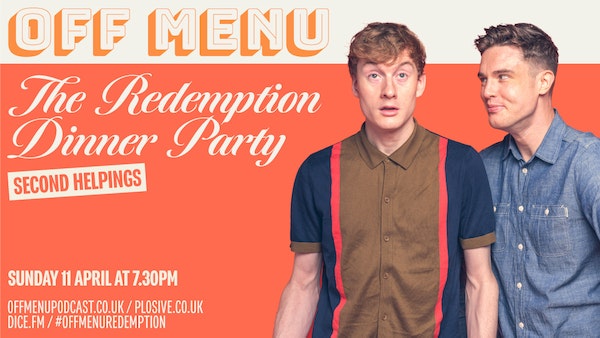 Still hungry? Ed Gamble and James Acaster re-open the dream restaurant and invite some of Off Menu’s most talked-about guests to The Redemption Dinner Party: Second Helpings. Will the previous podcast guests stick with their outlandish orders, or will they take a once-in-a-meal chance to change their minds?

Guests will be announced soon.

*£1 from every ticket goes to FareShare, the UK’s longest running food redistribution charity.

This is a live-streamed show only, it will not be released as a podcast episode.

Comedians Ed Gamble and James Acaster invite special guests into their magical restaurant to each choose their favourite starter, main course, side dish, dessert and drink. Ever wanted to eat your dream meal? It's time to order Off Menu.

Uncompromising and head-on comic who will deal with issues that are sexist or sizeist with a razor sharp wit. 'Britain's funniest female comedian in years.' (The Independent)

As one half of the prolific comedy duo Lee & Herring, Richard enjoyed phenomenal cult success as a writer and performer with shows such as Fist of Fun (BBC Two) and This Morning with Richard Not Judy (BBC Two). Richard completed a 94 date nationwide tour of his critically acclaimed Edinburgh Fringe show, Christ On A Bike: The Second Coming. In 2010 he also published his book, 'How Not To Grow Up', and released 'Hitler Moustache' - his acclaimed stand up show - on DVD. 'Herring is a superior comedian... Hilarious' (The Guardian) 'The King of Edinburgh... A new Richard Herring show is a never-ending cause for delight' (List) 'Stimulating and exhilarating... Utterly Hilarious' (Chortle). Richard Herring was named in Ents24's top 20 hardest-working comedians 2017 and 2015.