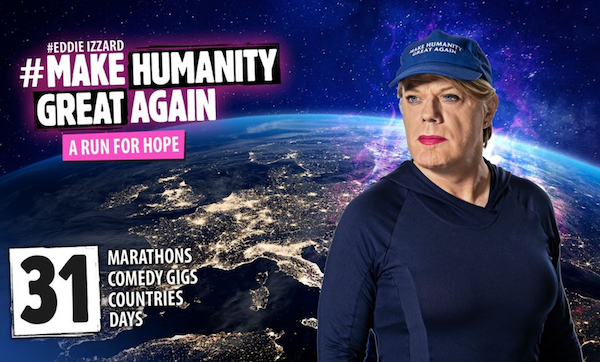 Actor and comedian Eddie Izzard has set an extraordinary New Year’s resolution, to stage ‘A Run for Hope’ that will usher in a new year and a new future, encouraging people all over Europe and around the world to unite together to ‘Make Humanity Great Again’

Eddie firmly believes that 2021 must be...“A time to look forward, to work together, to be tolerant and to live and let live.”

As well as running a full marathon every day across the month of January 2021, Eddie will also perform a ‘Best of’ stand-up comedy gig every evening - Eddie Izzard: Still Standing. The gig will be performed and streamed live globally each night.

Ebullient, unpredictable and sincere comic who is just as likely to play a village hall in Scotland as a mainstream venue, 'cos she can! She has been hailed as one of the foremost stand-ups of her generation, taking ideas and situations and extrapolating them into bizarre, tangential, absurd and surreal comic narratives. Eddie's musings have earned her countless awards including two Emmy's. Whilst initially renowned as a comic, Eddie is equally respected as a film, theatre and TV actor as well.