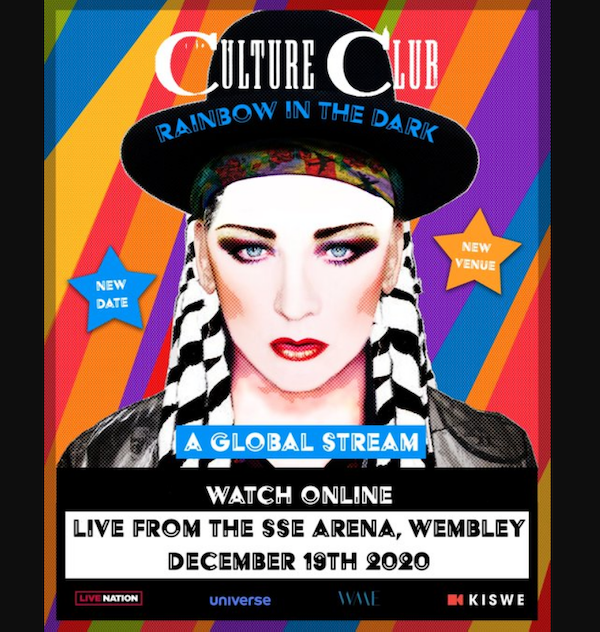 **PLEASE NOTE - these tickets are for the live stream only**

Boy George and Culture Club’s Rainbow in the Dark: A Global Stream LIVE from the SSE Arena, Wembley on 19th December 2020.

This show was rescheduled from 22nd November. All tickets will remain valid.

There is not a country in the world that doesn’t know the names of Boy George and Culture Club. The Grammy Award winners have sold in excess of 100 million singles and over 50 million albums, making it as one of the biggest pop bands of the 1980s. They achieved seven straight Top 10 hits in the UK, had number 1 singles in over a dozen countries and multi platinum album sales across the world, and were first group since The Beatles to have three Top Ten hits in America from a debut album. They were also the first group in music history to have an album certified diamond in Canada.

Boy George needs little introduction. With a career spanning over 30 years he first shot to international stardom in the 1980s as the front man of one of the UK's biggest exports - Culture Club - and had continued success as a solo artist. He has sold over 150 million records with top 10 hits in every country, including classics such as 'Karma Chameleon' and 'Do You Really Want To Hurt Me'. Boy George is also a hugely respected house DJ and continues to DJ successfully in clubs all over the globe.