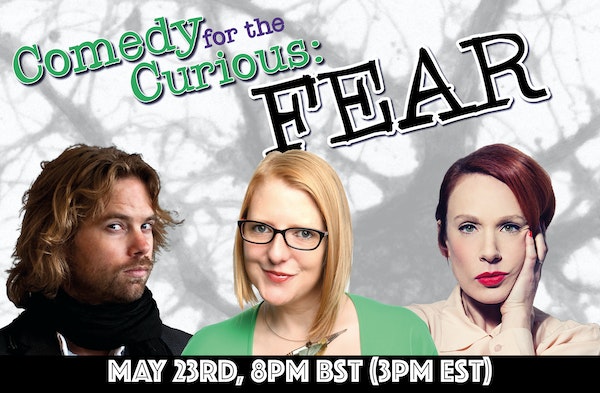 Comedy For The Curious - Fear

This unique, hour long comedy show is looking at all things FEAR: why we have it, why we like it, and how it affects our lives. Watch 3 comedians tackle the subject of fear from completely different angles...one from a scientific angle.

Comedy for the Curious is a science, comedy chat show for anyone who loves comedy and is, well, a bit curious. Join Robyn Perkins (Sydney Fringe Comedy Award Winner), and 2 guest comics to watch 3 unique stand-up sets, all around the topic at hand. This engaging hour then wraps up with our game "Versus the Audience", because who doesn't like a game?

Comedy for the Curious is a hilarious and interesting online comedy show, laced with science.

Barry Ferns has been writing and performing comedy since he was 17 years old. He won the Glastonbury Festival Comedy competition and reached the semi final of So You Think You're funny. He was described by Bristol's Venue Magazine as 'sickeningly talented' and by Matt Lucas as 'one of the best new acts I have ever seen'. 'Surreal genius' (Metro) 'I laughed so hard"... So funny someone should call a paramedic' (The Guardian).