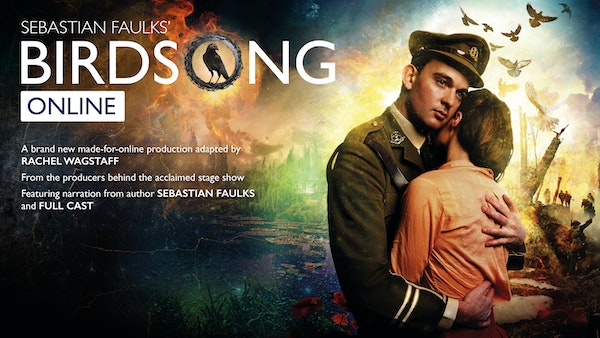 The Original Theatre Company and Birdsong Productions are re-releasing their hit online production of Sebastian Faulks’s masterpiece BIRDSONG on 16 July 2020 for just 3 days.

With a star cast including Max Bowden, Stephen Boxer, Tom Kay, Madeleine Knight and Tim Treloar and narration by Sebastian Faulks himself.

This uniquely created production will be released as special event to mark the 104th anniversary of The Battle of The Somme.

Told using video technology, live performance, sound design and music all woven together to create a unique portrayal of one of the greatest love stories in modern literature.

Birdsong Online will be raising money for The Royal British Legion.

Tickets £15 with a free digital programme, viewing limited to UK only.

Birdsong tells a mesmerising story of love and courage, before and during the First World War. In pre-war France, a young Englishman Stephen Wraysford embarks on a passionate and dangerous affair with the beautiful Isabelle Azaire that turns their world upside down. As the war breaks out over the idyll of his former life, Stephen must lead his men through the carnage of the Battle of the Somme and through the sprawling tunnels that lie deep underground. Faced with the unprecedented horror of the war Stephen clings to the memory of Isabelle as his world explodes around him. Suitable for ages 12+ years. 'Heartbreakingly beautiful, powerful and poignant. Go and see it; it may well be one of the most memorable pieces of theatre you are ever likely to witness' (British Theatre Guide) 'Faulks's First World War Tale gets the staging it deserves... enough to make me weep this time' (The Times) 'Superb... Thoroughly recommended' (The Daily Telegraph) 'Does the book justice' (Daily Mail).

The OTC was formed in 2004 with the specific aim of introducing the works of Shakespeare to new audiences.