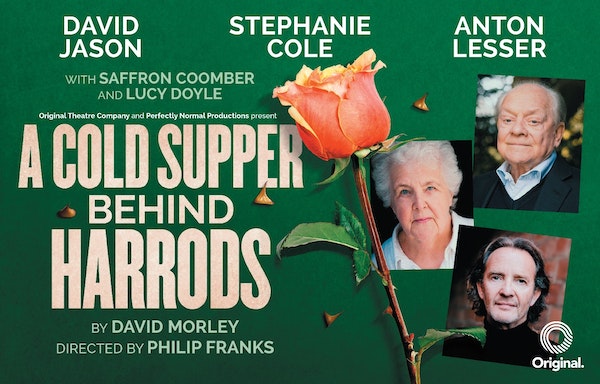 A Cold Supper Behind Harrods

Fifty years after the war that brought them together, three Special Operations Executive agents meet to record interviews for a television documentary.

As Leo, Vera and John wait to be interviewed in a beautiful English garden, drinking tea and doing the crossword, pleasantries give way to deeper darker subjects. A web of self-deception, lies and guilt begins to emerge. Only when all three are about to leave for London in a taxi, for “a cold supper behind Harrods” does the disturbing truth emerge.

The production will be followed by a Q&A with the cast and creative team.

Ubiquitous British actor, loved for his acclaimed roles as lovable rogue 'Del-Boy' in 'Only Fools and Horses', or 'Pa Larkin' is the idylic rural drama 'The Darlin Buds of May', or icy detective 'Jack Frost' in 'A Touch of Frost'.

Well loved and talented character actress who has starred in numerous stage shows and is best known for her roles in BBC TV's Tenko, Open All Hours, Waiting For God and Keeping Mum.