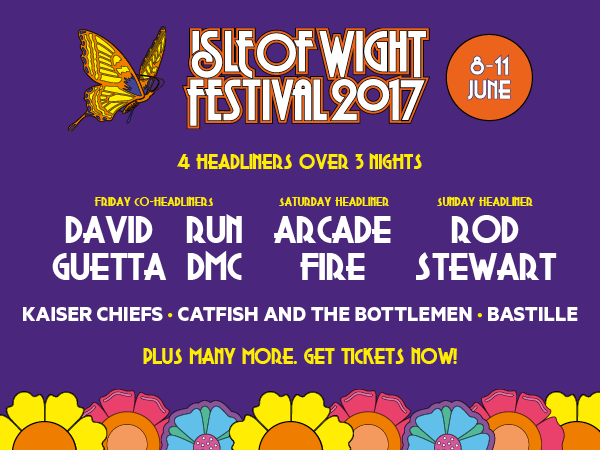 Following recent wins at the Live UK Music Awards for Best Festival (over 40,000) and Best Family Festival at the Family Traveller Awards, Isle Of Wight Festival have announced that next year's event will take place between 8-11th June 2017.

2016 marked the 15th anniversary of the Isle of Wight Festival since it was successfully relaunched in 2002. It has become one of the most exciting annual global music events of the summer with a proud heritage of show-stopping headliners, including, Foo Fighters, The Rolling Stones, David Bowie, The Killers, Paul McCartney, Coldplay, Queen + Adam Lambert, The Who, Blur and Fleetwood Mac.

The first headliner to be announced is Arcade Fire, who will take to the stage on Saturday 10th June. The much coveted appearance will be their only UK festival of the Summer and their first UK festival performance since 2014.

Rod Stewart is the second headliner to be announced and will take to the stage on Sunday 11th June. He will bring his spectacular live show to the Festival for the first time, performing a set of both classics and new hits in his dazzling signature style.

Jack Rocks With This Feeling

Double grammy award winner David Guetta cemented his status with 2009's multi-platinum One Love; a genre-busting hitmaker whose in-your-face fusion of electro and hip-hop beautifully warps the pop landscape. His track record has been impeccable for nearly two decades and he is now simply, a phenomenon. His name is synonymous with the world's greatest dance music and with parties that bring that music to life. David Guetta has sold over 20 million records worldwide, but despite his pop success, he is a DJ first and he has elevated the art to unprecedented levels.

From Hollis, New York, Run DMC are the fathers of hip hop and the biggest wearers of Adidas! They came to worldwide notoriety in 1986 with their hip hop and metal crossover, teaming up with Aerosmith on 'Walk This Way'. They also scored their first UK no.1 in 1998 when teaming up with Jason Nevins for the smash hit 'It's Like That'. Eminem inducted them into the Rock and Roll Hall of Fame, making them only the second hip hop group in history to do so (the first being Grandmaster Flash and the Furious Five).

Best loved for his unmistakable voice and incredible versatility, Rod Stewart's career has spanned over four decades, making him one of the music world's longest serving artists. With his most famous hits including Maggie May and Tonight's The Night, he was inducted into the Rock and Roll Hall of Fame in 1994. Able to turn his hand to anything from rock to folk to standard classics, Rod's gravelly voice and distinctive interpretations have made him one of our most famous and well-loved artists.

Jonas Blue was born and raised in London and has so far taken the music industry by storm, implementing his musical cues in all of his undertakings. From pop to classic dance music, as well as delving into elements of tropical house.

Example's meteoric rise from fresh-faced Fulham rapper to worldwide club anthem superstar has been nothing short of spectacular. Since first hitting the charts in 2009, Example has gone from strength to strength.

A classico-electronical collective. The core members Jack Patterson (bass, keyboards), Grace Chatto (cello) and Milan Neil Amin-Smith (violin) met while studying as undergraduates in Cambridge, later joined by brother Luke Patterson (drums). Their unique take on dance music sees beats collide with classical, where Baroque meets house and pop. Classing themselves as an 'electroquartet', and featuring a string of guest vocalists, they have been described as the new Disclosure with a chamberpop bent.

Fresh with a capital PH, Crinkle Cuts deliver you a blasting of tantric funk, smooth reggae and new-wave latin ska woven together with good vibes for an eccentric, exotic and eargasmic live performance. It would be no exaggeration to say that their music never fails to get a crowd dancing as Eden Festival recounts the Crinkle Cuts as ‘One of the most electric sets of the weekend’’. As well as their incredible live performances, Crinkle Cuts music has been well received with the BBC describing the Crinkle Cuts as “Amazing!” Bigger than Patrick, their new LP is out right now to stream on Soundcloud or to purchase on Bandcamp, iTunes and other major online stores. Known for their tracks ‘Two Shoes’ and ‘Dan’s Song’, their debut album is underway, which includes the new hit ‘Scroll Through Life' and is not one to be missed!

Resident DJ at Supercharged, aka Martin Reeves looks like your uncle but is in fact a prolific producer, remixer, DJ, label boss and record shop owner. His up tempo hip-hop and furious funk has driven him into DJ Magazine's world's top 100 DJs poll three years in a row. Finger Lickin' good.

AKA Dom and Mark with a great mix of two-step and their own brand of breakbeat. Nominated for Best Compilation and Best Breakthrough DJs at the Musik Magazine Dance Awards.

Sam And The Womp

Sam And The Womp are a Camden nine-piece performing original high-energy Balkan, ska, dub and rave out material with a huge womp of gypsy dubstep for pudding. Consisting of de facto band leader and chief rabble-rouser Sam who punches out the horn riffs, the sultry vocals and feline moves of vocalist Lady Oo and the enigmatic musical alchemist Aaron Audio, Sam and the Womp prioritise the party as they break free of conventional genres.

Plastic Mermaids have spent most of the last year hidden away in their home studio constructing a unique style of folkedelic dream pop, escaping only for the occasional surf. Weaving together vocal harmonies and a diverse selection of instruments they create folky melodies with experimental electronic textures. Furthermore, they wear amazing jumpers.

This is the psychedelic nightmare spun by The Wytches, who are spreading their subversive message across England in the dark guise of 50s surf riffs, desert whips, melancholic shuffles and a kaleidoscopic stage performance that will put you under.

Hailing from Birmingham, the indie four-piece gang have gained a fierce live reputation. Inspired by a universal love of Britpop and 90's American college rock, combined with jangling guitar steps into psychedelia. 'An undeniably resplendent sonic melange of all the best bits of Blur and Supergrass' - The Line Of Best Fit