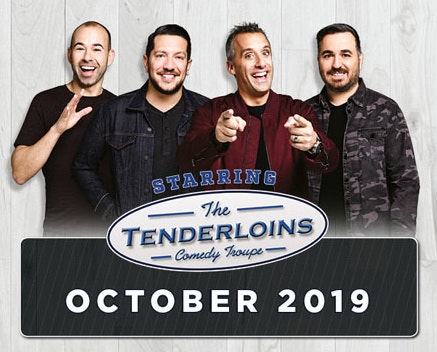 The Tenderloins, a New York-based comedy troupe, whose four members - Joe Gatto, James Murray, Brian Quinn and Sal Vulcano - are the creators, executive producers, and stars of Comedy Central’s hit series, Impractical Jokers. Natives of Staten, Island, New York who met in High School, The Tenderloins were formed in 1999. After years of performing live improv and sketch comedy shows, The Tenderloins graduated to the web, captivating a new found audience of millions with their internet sketches before taking their hidden camera pranks to the small screen with Impractical Jokers. Now, Impractical Jokers airs in over 70+ countries and is the #1 show on Comedy Central UK, Comedy Central India, and the #1 show in its timeslot on US cable. Impractical Jokers follows the guys as they coerce one another into doing public pranks while being filmed by hidden cameras. With each new season the show continues to take dares to outrageous levels with a whole new arsenal of over-the-top hijinks, bringing the show and the guys to new locations and setting each other up for some of the most uncomfortable antics yet.