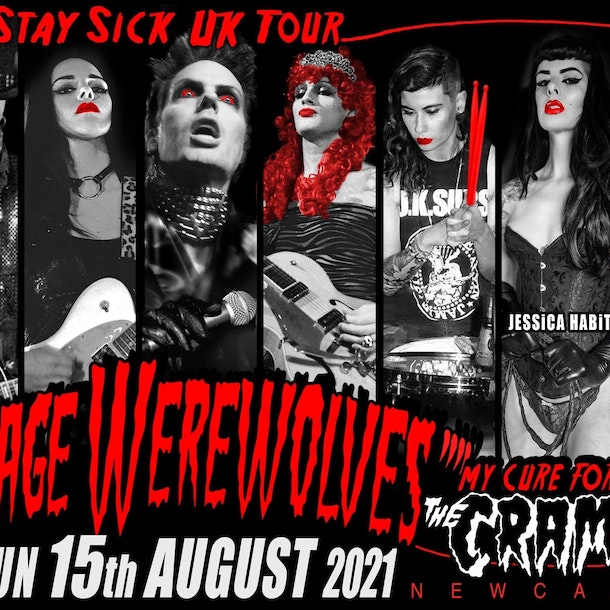 PLEASE NOTE FULL EVENING, early start. STAGE TIMES 7:00pm Curtain Call, 8:15pm She's In Bauhaus, 9:15pm Teenage Werewolves
TEENAGE WEREWOLVES - World’s best Cramps tribute return to England after their wildly successful 2019 UK tour ended in London’s World’s End with Magenta of Rocky Horror on stage with the band to sing the Time Warp! This sexy freak-out & visually intoxicating show started preaching the gospel of The Cramps from the pulpit-stages in Los Angeles (Viper Room, Whiskey a Go-Go) after the death of rock’s most-uninhibited singer, Lux Interior. . . TWs singer Jack Atlantis is from the same hometown as Lux and merge John Waters & Russ Meyers overtones to create an show loved by newcomers and hard-core fans alike.
“The Teenage Werewolves are the closest you can get to the real thing / creepy cool crooner Jack Atlantis channeling of Lux Interior was spell-binding” (LA Weekly). “One of the best rock shows I’ve ever seen” (David J of Bauhaus).
facebook - www.facebook.com/TeenageWerewolves

YouTube - www.youtube.com/channel/UCrb-pUVN3EINSWYqtHnpybg
instagram - www.instagram.com/jessica_habit
CURTAIN CALL are the UK's only tribute to The Damned. Formed originally in 2015 (formerly as Machine Gun Etiquette). Based in Newcastle but having such a strong following of committed fans has allowed them to play many areas of the UK. Being very experienced musicians and huge Damned fans helps to re-create authentic covers from as far back as New Rose through to Black is The Night.
facebook - www.facebook.com/Curtain-Call-1739682949419977