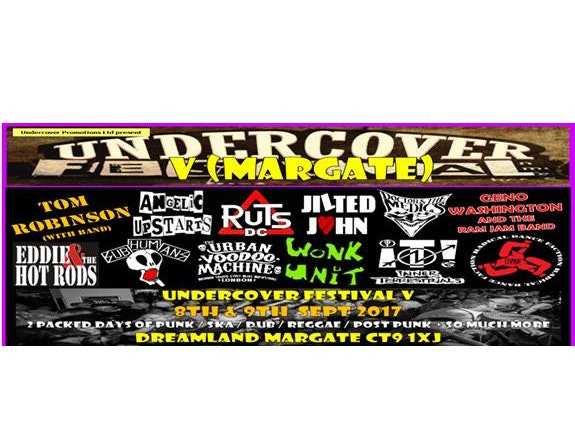 A 2 day celebration of alternative music including Punk / Ska / Dub / Reggae / Alt + so much more.

“See You Down The (Sea) Front”

The Line Up for Undercover Festival V is now complete.

Undercover Festival now in its FIFTH year have just announced their full line up which will be held in the unique setting of Dreamland Margate in Kent.

Undercover a festival venue and experience that defies all other conventions and festival templates, not only do we have a cracking line up but festival goers can experience many retro rides and amusements plus it is once again held undercover i.e. not outdoors so if it’s peeing down come September it’s not a problem and your beer won’t get diluted. Leave your wellies at home, and enjoy one of the best small alternative festivals the South has to offer this September.

“With the latest additions we have finally put in place a line-up that we believe is packed with bands that should appeal to most that like their music alternative. We believe we have most bases covered AND we guarantee an X Factor Free zone as there is no place for that s***e on our stages” said Festival Organiser Mick Moriarty.

Mick added “Preparation are going well and ticket sales are up on last year so out advice is get in quick to get your tickets because when they are sold out that’s it, we have more shops selling tickets this year plus you can get your tickets online from Dreamland or the Undercover website.

Line up subject to change at short notice.

There is a huge line up and tickets can be bought in advance online of from various locations details from www.undercoverfest.com

Details of Dreamland plus you can also get tickets from them as well www.dreamland.co.uk

See 8 tour dates featuring The Doctor (Doctor And The Medics)

Menace from Islington formed in 1976 and are well known for their singalong rant and rave song 'GLC' directed at the Greater London Council. An old school punk rock band, still as incendiary as ever.

Managing to be intense, dance-able and insanely catchy, it carries the Imperial Leisure guarantee of crowd and band alike having the time of their lives. Originally from London, Imperial Leisure manifested during early 2000 in the midst of many a dubious college party. No surprise really then that they quickly gained a reputation for high-intensity, alcohol-tinged, good-time carnage.

Born in Cambridge in 1950, Tom Robinson first became known in the late 1970s as a musician and LGBT activist with the Tom Robinson Band (TRB) who were early supporters of Rock Against Racism and Amnesty International. In 1977 their Top 5 debut release 2-4-6-8 Motorway became one of the landmark singles of the UK punk era. Other hits included Glad To Be Gay, Up Against The Wall and the band's debut album Power In The Darkness which went gold in the UK and Japan. As a solo artist Tom had further solo hits in 1983 with War Baby and Atmospherics: Listen To The Radio, and co-wrote songs with Peter Gabriel, Elton John and Dan Hartman. His 14th studio album Only The Now was released in 2015 featuring guests such as Billy Bragg, John Grant and Ian McKellen. Recent festival dates include Latitude, Green Man and headlining the Left Field stage at Glastonbury 2016. As a radio broadcaster Tom hosts three shows a week on BBC Radio 6 Music, is a member of the Ivor Novello Awards committee and in 2016 was awarded a fellowship of LIPA to recognition his support for new music artists through BBC Introducing.

Always ready to rock the house, the King of the Swingers Geno Washington is the incarnation of all things '60s. Hipsters and flipsters, movers and shakers alike, are all rendered incapable of having a bad time, when the Good Time Guru gets his army of fans on the good foot! The old Geno magic still drags them in and sends them home high.

Led by the darkly charismatic, Norwegian-born Paul-Ronney Angel, The Urban Voodoo Machine is a supremely talented collective of London-based musicians who have been bringing the spirit of the carnie to an ever-growing audience of dedicated fans these past few years. Sounding like they should be from the Deep South, the band are self-styled purveyors of 'Bourbon-soaked Gypsy Blues Bop 'n' stroll'.

A fun, catchy and charged up garage rock, pop and punk band from South London. Formed in 1986 they have long established themselves as one of the UK’s greatest ever Garage Punk bands. They have shared the stage with many of their own heroes (and influences) such as The Ramones, The Damned, The Cramps, Fleshtones, Revillos, Urban Voodoo Machine, Legendary Shack Shakers, The Germs, Wreckless Eric and many others.

Anarchist punk legends from the 80s.

Classic punk four-piece from South Shields. The Angelic Upstarts make rowdy, angry and feisty punk, the way it was made in the first place. Having been playing together since the late seventies, these guys know both their punk and their politics.

Irish anarcho DIY punks who formed in 1981. They've since supported the likes of the Damned, Manic Street Preachers, Snuff and the Sex Pistols on their Filthy Lucre tour.

Combining the best of Brazilian popular music with the power of a bateria.

Duncan Reid is the former bass player/singer/live front man with legendary punk group The Boys. Following the release of his acclaimed solo album Little Big Head he has headed out on tour with band Duncan Reid and the Big Heads.

Berkshire collective R.D.F, founded by Chris Bowsher, combine punk, dub, and ska, while Bowsher's lyrics, spoken rather than sung, deal mainly with political issues. They were a regular act on the UK free festival scene prior to the 1994 Criminal Justice Act, and were part of the crusties and anarcho punk movement. After a split in the mid 90s, they reformed in 2006 and continue to play today, with 2012's 'Ammunition' being their first new album since 1995.

A five piece post-punk band from London who formed in 2011.

Aka Graham Fellows of John Shuttleworth fame, reviving his 70's punk character Jilted John, famous for the chorus "Gordon is a moron". The single 'Jilted John' by Jilted John reached no.4 on the UK singles chart in 1978. Fellows brought Jilted John back for the 2008 Big Chill festival, and then resurrected him once again in 2016 for Blackpool's Rebellion festival. 2018 marks Jilted John's 40th anniversary.

The Long Game are a rock band from Sittingbourne, UK. Over the span of their career they have played the Vans Warped Tour, Boomtown, Rebellion and Great Escape.