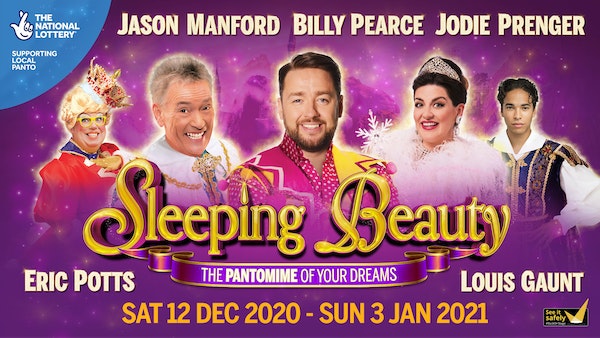 Following the announcement that Manchester is in Tier 3 from Wednesday 2 December, when the national lockdown was lifted, Manchester Opera House and Qdos Entertainment have announced that the opening of Sleeping Beauty will be delayed and will now begin on 24th December 2020 and run until 10th January 2021.

Sheena Wrigley, Theatre Director of Manchester Palace & Opera House said: “Given the downward trend of the virus in the City, and the community’s campaign for the reduction of the Tier level at the next review, we continue to be hopeful that we can stage the show this Christmas, opening a little later than planned on 24 December.

We thank all of our customers for their patience at this time as we work to get affected bookings rescheduled, and are also grateful The National Lottery for their continued support to enable the rescheduled performances to go ahead.”

The Ambassador Theatre Group recognise the NHS for their hard work through this difficult year and will now be offering them free tickets to the performance on Friday 8 January at 7pm. All original ballot entries remain valid, and winners will be contacted the week commencing 7 December 2020.

The relaxed performance of Sleeping Beauty which has been specially adapted to allow those with autism, sensory and communication disorders, learning difficulties or anyone who would benefit from a more informal setting to enjoy the performance, comfortably, will now take place on 6th January at 1pm.

Renowned for his hilarious observations and loveable, friendly delivery, Jason has been a firm favourite with comedy fans of all ages since his first solo stand-up show earned him huge critical acclaim and a nomination for the prestigious Perrier Newcomer Award back in 2005. ‘8 out of 10 Cats’ (Channel 4), ‘The Nightly Show’ (ITV1), ‘Sunday Night at the Palladium’ (ITV1), ‘Live at the Apollo’ (BBC One), ‘Have I Got News For You’, (BBC One), QI (BBC Two) and ‘The Royal Variety Performance’ (ITV1) have all helped establish Jason as a nationally known comic. Jason Manford was #1 in Ents24's Hardest Working Comedians of 2018 list.

A National treasure, and without doubt one of Britain's most talented and best loved comedians, multi award winner Billy Pearce, has won just about every comedy award going, including a British comedy award, Solo comedian of the year, and Best television comedy newcomer at the London Palladium. There are few stages upon which Billy has not appeared, and he's broken Box Office records at a number of National Theatres. 'In a live situation there is quite simply no one like him' (The Stage) 'Billy Pearce absolutely nails his stand-up routine, packed full of punchlines' (Chortle).

Winner of the TV show 'I'd Do Anything' and star of the musical stage.

The actor who played Mr.Moore in ITV's 'Brookside'.