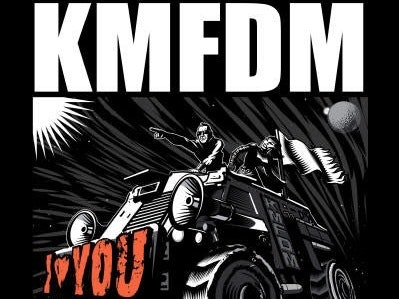 German Industrial Rock legends KMFDM announce an exclusive tour of the UK, presenting their new releases 'Kunst' and 'I Heart You'.

Joining them on this very special tour are none other than the awesome Electro-punk shockers Sheep On Drugs who will be very special guests on all 5 of the UK dates! Along the way, they will also be joined by local support bands.

KMFDM live shows are always an exciting and interactive experience for both band and audience alike. You haven't experienced KMFDM until you have seen them live!

Sheep on Drugs are a British techno/Industrial music group, formed by Duncan X (a.k.a. King Duncan) (vocals) and Lee Fraser (a.k.a. Dead Lee) (guitar/keyboards) and currently composed of Fraser and Johnny Borden (vocals/keyboards). Originally classified as part of the rave movement, the duo emerged in the early 1990s with a string of singles, including Motorbike, 15 Minutes of Fame and Track X (later covered by Grace Jones as "Sex Drive").

Sinnergod are a guitar-driven heavy alt-metal band from Wigan, UK. Sinnergod are noted for their dark lyrics and catchy tunes with melodic harmonies. Sinnergod's sound is a fusion of contemporary gothic metal combined with old school power riffs and guitar solos. However, in their most recent recordings, Sinnergod have also introduced a more melodic sound with lighter melodies and more powerful vocals than their earlier work, as well as a more polished production.