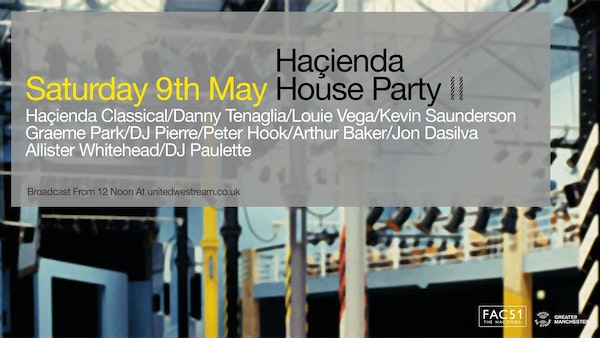 Over one and a half million of us came together yesterday throughout the world to dance with The Hacienda House Party.
There was so much love that we just have to do it again so join us Bank Holiday Saturday 9th May with United We Stream GM for another 12 hour party.

Please help spread the word on the next House Party by inviting all your friends to this event page.

If you didn’t manage to donate you can still do so here: bit.ly/HaciendaHousePartyDONATE

Thank you all for all of your support. Stay Safe.

Haçienda Classical is curated by Graeme Park and Mike Pickering, the DJs who shaped the Haçienda sound. Together with classical accompaniment from the Manchester Camerata and special guests, the seminal tracks that defined a generation at the original club are recreated and transformed into London’s biggest nightclub.

Over 25 years as a DJ, the legendary 'King Of New York' has the ability to layer sounds from across a wide generic spectrum, the only constant being the sheer quality in programming and his sublime mixing style.

Graeme Park has been DJing for over 25 years. He was there before it all started, and hes still there, still rocking it, years later longer than some of the people on the dancefloor have been on the planet! Expect to hear the A to Z of dance music, with plenty of classics mixed with lots of current tunes!

One of the quintessential dance producers and underground house DJs. Being known as a creator of a defining genre of music is reserved for the legendary, but remarkably DJ Pierre has given birth to two styles of house music, so his legendary status is an even more worthy one. It’s well documented that he’s the creator of Acid House with his seminal ‘Acid Tracks’ as part of the group Phuture, but alongside this he solely created his infamous Wild Pitch sound.

Best known as the bassist from Joy Division and New Order. Peter decided to honour the outstanding work of his first band and the undoubted genius of the late Ian Curtis by giving people the opportunity to hear past Joy Division albums performed live and in their entirety. Backed by his band The Light, Hooky first played 'Unknown Pleasures' at the Factory club in Manchester in 2010, and has continued to tour the back catalogue ever since.

Arthur is one of the few producers who can actually lay claim to having changed dance music history. He started DJing in the early 70's and has since revolutionised the whole music industry with his vision of how dance music should sound. Perfecto recently released the Arthur Baker Breakin' Album to much acclaim, and as the old saying goes, 'You can't keep a good man down'.

One of the country's top dance DJs who made his name at Manchester's famous Hacienda club.

One of the most talented DJs you're ever likely to come across. Given that he has been at the top of the premier league for the last 10 years, his lasting appeal is undeniable. The superstar DJ has held residencies at Manchester's Legendary 'Hacienda', Nottingham's 'Venus' alongside Sasha and 'Cream' in Livepool. He has worked with the likes of Martha Walsh, Natalie Imbruglia and Robbie Williams. A master of the art behind the decks and definitely one not to be missed.

A DJ embracing a versatile musical spectrum ranging from electro jazz to R'n'B through classic old skool to rare groove.