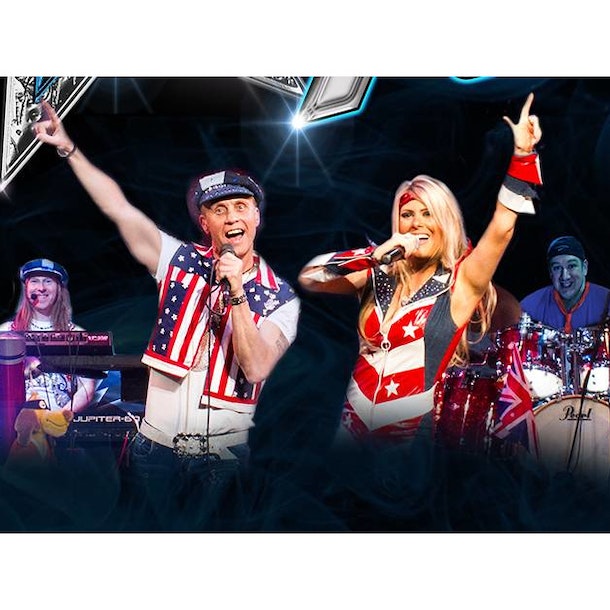 Supersonic 70s show is GLAM packed with all those incredible hits from the greatest musical decade of them all the 70s!

Led by the ‘Catsuit Wonder Girl’ vocalist Janey Bombshell, this all live band delivers a power packed spectacle. From the towering might of Queen, Fleetwood Mac & ELO, through the ‘pin-up pop’ of David Cassidy, David Essex and Donny Osmond whilst foot stompin’ to the sounds of Sweet, T.Rex, and Suzi Quatro you won’t have time to catch your breath!

Alongside timeless classics by The Carpenters, 10cc and Elton John, the band even add in a touch of ‘Grease’ and the Eurovision song contest.It’s no wonder it’s being called, “the greatest 70s show in theatre land”

So bring a strong pair of lungs, and favourite 70s outfit, as it is time for you to live out your childhood memories once more on this glorious rollercoaster ride of 70s nostalgia.

From the towering majesty of Queen, ELO & Carpenters, the ‘pin-up pop’ of The Osmonds, David Essex & David Cassidy, and the foot stompin’ Glam Rock of Sweet, Mud & T.Rex to the classic sounds of Saturday Night Fever & Grease, and even those winning UK Eurovision hits. This highly energetic and visual presentation does not skimp on humour either, and amongst the supreme musicianship, fun is guaranteed with plenty of laughs along the way in this cavalcade of a show. With genuine 70’s costumes with all the glitz and blitz you would expect from this colourful era of denim, satin & leather, & completed with visuals, backdrop, & original ‘Chopper Bikes’, this sensational show really is not to be missed. You may even get so see a real ‘Womble’ too… So, come join the band in their travelling 70’s time machine, back to the days when pop really was at its peak!