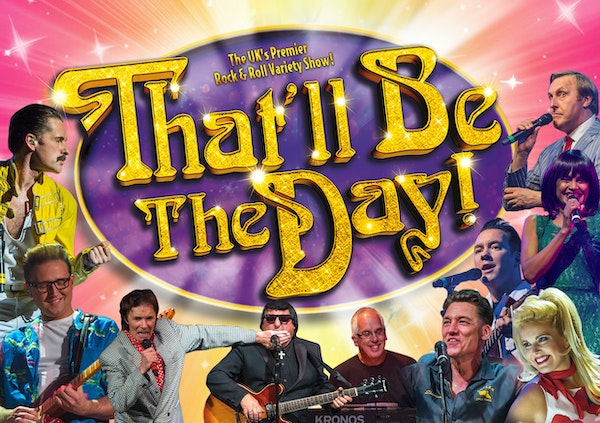 That’ll be the Day reached another milestone in 2020 as it celebrated its 35th anniversary!

From humble beginnings, the show has grown into a “must see” attraction all over the UK, coming up with a new production from its multi-talented cast year after year.

Unashamedly nostalgic, TBTD takes its audience on a rollercoaster ride through the ‘golden’ age of Rock and Roll and Pop. The show has been described as ‘Relentlessly Entertaining,’ mixing brilliant vocals and superb musicianship with impersonations and hilarious comedy routines.

Guaranteed a great night out, this is truly the best ‘feel good’ show on the road.

Prepare for a party as the legendary That'll Be The Day, the UK's most successful touring rock 'n' roll production, returns with a Brand New Show. Trevor, Gary and the gang bring on back the good times with a combination of their unique feel good comedy routines mixed with back to back non-stop classic gold hits from the 1950s through to the 1970s to produce a show with a real feel good party atmosphere! You're guaranteed to be on your feet and dancing before the night is over. Don't miss this party! 'What a great value for money show That'll Be The Day is. Not to be missed!' (Daily Mail) 'This show just gets better and better' (The Daily Telegraph).