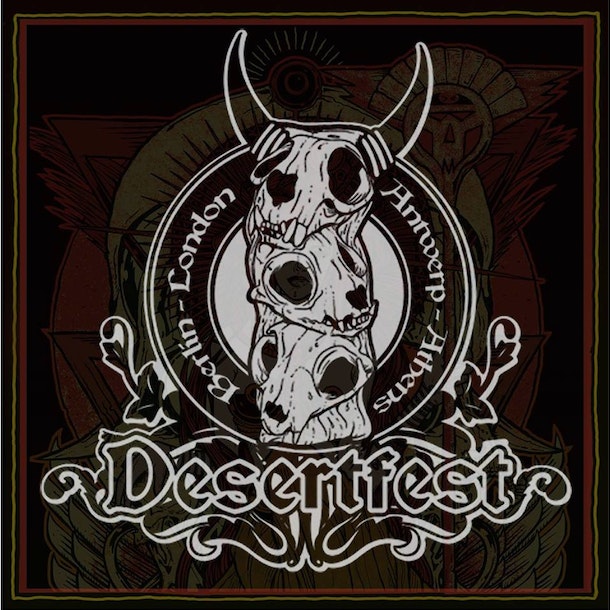 Spanning across 3 major venues in the heart of London's heavy metal scene, Camden, DesertFest plays host to not only the biggest, but the best underground talent, from the worlds stoner rock, doom, psych, heavy metal and sludge scenes.

Legendary stoner rock band Sleep split in 1998 after two hugely influential albums and members went on to form underground heroes High On Fire and Om. They reunited in 2009 and have been performing again ever since.

Self-styled 'Imperial Underdogs of Scandinavian Rock', Turbonegro has been a major force in the global underground for more than a decade, radiating a different, most brilliant hue of dumbness and an authenticity of a higher order. Their music recalls the bon vivant antics of Alice Cooper and the urgency of Black Flag served with the tidiness of the Ramones.

Wolves In The Throne Room

Wolves in the Throne Room re-imagine black metal as an ode to rain storms, wood smoke and the wild energies of the Pacific Northwest. Releasing their first album in 2006, the band have gone on to become one of the most potent and highly regarded bands in extreme music.

Saint Vitus are a highly influential American doom metal band from Los Angeles. They have been regarded as one of the first bands of the genre, starting out as early as the late 1970s, along with Pentagram and Trouble. For most of their career, the band comprised vocalist Scott Weinrich, bassist Mark Adams, guitarist Dave Chandler and drummer Armando Acosta. After breaking up in 1996, Saint Vitus briefly reunited for a tour in 2003, and are back together again as of 2008.

Black Spiders are a rock band based in Sheffield, featuring Pete from Groop Dogdrill, onetime cavern regulars. Their music is fast paced and energetic, drawing upon bands such as Black Sabbath, Motörhead AC/DC, Turbonegro, Led Zeppelin, The Stooges and Aerosmith as influences.

A four piece German rock band who formed in 2007.

An alternative / blues / noise rock duo from Germany who have already shared the stage with bands including 65daysofstatic and Millencolin. Performing enticing blues-saturated heavy rock, with Fynn playing on obscure vintage guitars he bought from thrift shops around the world while Philipp Mirtschink beats the drums. The set has no cymbals whatsoever - instead he plays self-made percussion instruments with huge chains, bells, and more.

'Satan's Satyrs play some of the most visceral and demented rock n' roll around – full-frontal lo-fi lunacy. Not long out of their teens, the Virginia trio were initially inspired equally by the pummel-drive of Black Flag, the chest-crushing vortex of vintage Electric Wizard, the primitive bruising of Witchfinder General and the loose hell of Pentagram, alongside all manner of cranky old VHS horror movies.'

Elephant Tree are a band who, after cutting their teeth in the London metal scene, have established a place within the current growing Stoner Metal genre with a combination of ballsy blues rock and heavy riffs.

A doom / black metal duo from Falmouth whose influences include Electric Wizard, Mayhem and Big Business.