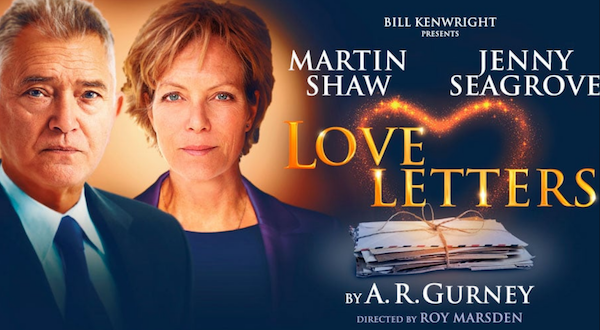 When the young Andrew Makepeace Ladd III accepts an invitation to Melissa Gardner’s birthday party, Melissa writes him a thank you note… and a unique romantic friendship and delicately warm correspondence destined to last for almost half a century is born.

Love Letters is the tender, tragi-comic story of the shared nostalgia, missed opportunities, and deep closeness of two lifelong, complicated friends. A play that could have been written for the Covid era about two people physically separated yet brought together by candid communication and shared confidences, a romance blossoming across the miles and the years.

Popular stage actor who has also appeared regularly on TV screens for over three decades. His role in the iconic series The Professionals ensured his status as a British screen legend.

Jenny Seagrove first found fame in 1983, with the film Local Hero, and the TV mini-series A Woman of Substance. As well as TV and film, Jenny's an accomplished stage actress, whose recent credits include Brief Encounter with Judge John Deed co-star Christopher Cazenove, The Constant Wife, and a female twist on The Odd Couple, with Paula Wilcox.