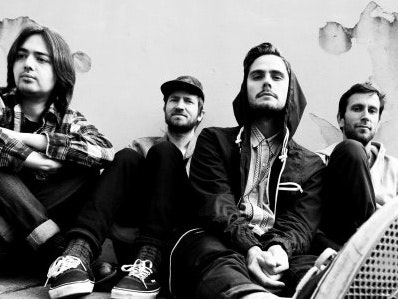 at The Victoria (Dalston), London
Passed

London blissed out indie-rock four-piece signed to Wichita Recordings. Their sound harks back to Creation bands. Think Swervedriver, My Bloody Valentine’s two classic albums, the pop-tinged psychedelia of The Boo Radleys and Teenage Fanclub, with hints of Sugar and Dinosaur Jr thrown into the mix. An electrifying blend of raucous guitars and breathy vocals, honey-dripped with ennui and emotion.

The music Cleo Tucker and Harmony Tividad release as Girlpool occupies a transient space. Their constant evolution makes it perfectly impossible to articulate exactly where their project falls within the contemporary musical canon; this is one of the many reasons Girlpool's music is so captivating. Never before has a group's maturation been so transparently attached to the maturation of its members. This is due in large part to the fact that Girlpool came into existence exactly when Girlpool was supposed to come into existence: at the most prolific stage of the digital revolution. Both online and in the flesh, Tividad and Tucker practice radical openness to the point where it may even engender discomfort; this is exactly the point where it becomes clear why theirs' is such a special project: they accept the possibility of discomfort-Chaos-and show you how to figure out why you might feel it. This is achieved through their ability to empathize as best friends and partners in creation, with the intention of making music that provokes.