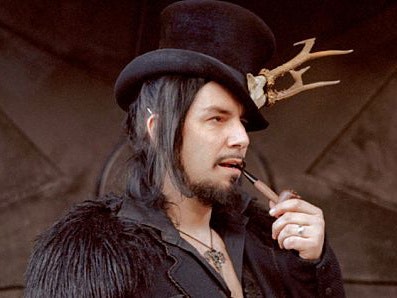 Cuban-American dark cabaret musician, creator of comic books, animation and toys. Expect murder ballads, tongue-in-cheek macabre and just enough bawdy songs about Star Trek and Star Wars to keep a Con audience rolling in the aisles. Many also know him for ‘Brains!’ from Cartoon Network show “The Grim Adventures of Billy And Mandy”. Voltaire’s live shows, whether solo or with his skeletal orchestra, are highly theatrical – full of stories and games, not surprising given two decades of directing commercials and animating short films. He also has created dozens of animated spots for MTV, The Sci-Fi Channel, and many more (including most recently Fangoria TV). Somehow managing to be the epitome of Goth and the opposite of stereotypes with a unique take on what has been variously described as ‘gypsy-punk’, ‘dark-folk’ and ‘cabaret’. And yet a joyful and infectious show, energetic and thoroughly engaging with humour, parody and maybe the occasional naughty joke.